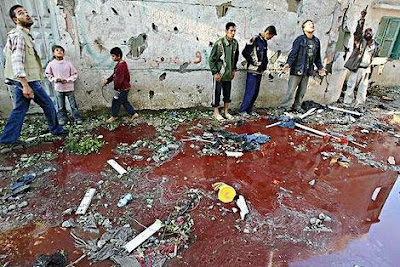 Nu har Hamas startat den riktiga massakern
i Gaza - mot sina "landsmän". Fatahanhängare
grips och mördas i stora mängder. Tusentals
f d tjänstemän i den s k Palestinska Admini-
strationen och partiaktivister i Fatah har suttit
i husarrest medan striderna med Israel pågick.
Nu grips de och samlas i provisoriska
koncentrationsläger, oftast i sjukhus eller FN-
skolor. Där misshandlas och torteras de innan
de slutligen mördas.
***
A Fatah official in Ramallah told the Post that
at least 100 of his men had been killed or
wounded as a result of the massive Hamas
crackdown. Some had been brutally tortured,
he added.
The official said that the perpetrators belonged
to Hamas's armed wing, Izaddin Kassam, and
to the movement's Internal Security Force.
According to the official, at least three
of the detainees had their eyes put out
by their interrogators, who accused them of
providing Israel with wartime information
about the location of Hamas militiamen and
officials.
(...)
Eyewitnesses said that Hamas militiamen had
turned a number of hospitals and schools into
temporary detention centers where dozens of
Fatah members and supporters were being
held on suspicion of helping Israel during the war.
The eyewitnesses said that a children's hospital
and a mental health center in Gaza City, as well
as a number of school buildings in Khan Yunis
and Rafah, were among the places that Hamas
had turned into "torture centers."
A Fatah activist in Gaza City claimed that as
many as 80 members of his faction were either
shot in the legs or had their hands broken for
allegedly defying Hamas's house-arrest orders.
***
Läs hela artikeln
***
Dagen, Dagen, SDS, SDS, SvD, SvD,
VG, VG, VG, DB, DB, DB, DN, DN, HD, Bar, YA, YA
Upplagd av hcp kl. 09:00