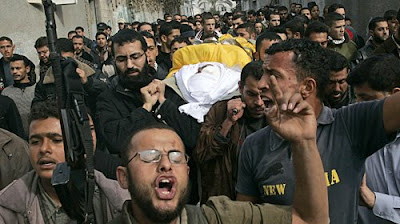 När nu den s k internationella pressen väller
in i Gaza för att intervjua sina kompisar i
Hamas, så råkar det ju slinka med en och
annan som både har yrkesheder och kunskaper.
Naturligtvis ingen svensk journalist, utan det
blev Lorenzo Cremonesi från italienska Corriere
della Serra. Han har ägnat sig åt några dagars
kritisk och undersökande journalistik i Gaza.....
**
Resultatet: Han kan smula sönder en av Hamas
centrala propagandalögner, antalet döda i Gaza !
**
(IsraelNN.com) Italian journalist Lorenzo Cremonesi,
who works with the Corriere della serra newspaper,
reported Thursday that Hamas had vastly overstated
the number of civilian deaths in Gaza. While Hamas
claims that 1,330 residents of Gaza were killed in
the operation and approximately 5,000 wounded,
the real number of casualties was far lower,
Cremonesi says.
Cremonesi's report was based on his own findings
after touring hospitals in Gaza and talking to
families of those killed or wounded.
“It is sufficient to visit several [Gaza] hospitals
to understand that the numbers don't add up,”
he explained.
**
Cremonesi estimated that between
500 to 600 people were killed in
the fighting. Most were young men
between the ages of 17 and 23 who
were members of Hamas, he said.
**
Many hospitals had several empty beds,
he reported. Hamas has stated that Gaza
hospitals are filled to capacity due to the
large number of victims, with many of
the wounded being turned away due to
the shortage of doctors and supplies.
The Italian report also confirmed Israeli
allegations that Hamas had used civilians
as human shields and used ambulances
and United Nations buildings in the fighting.
Those who tried to drive the terrorists away
in order to protect their families were beaten.
Civilians told Cremonesi that they shouted
at Hamas and Islamic Jihad terrorists to
leave the area to avoid drawing Israeli fire
on civilians. The terrorists responded by
calling them “traitors,” “collaborators” and
“cowards,” and insisted that any civilians
killed would be martyrs destined for paradise.
**
Civilians also reported that Hamas terrorists
disguised themselves as paramedics and
drove ambulances during the fighting.
In addition, terrorists launched rockets
from UN buildings. Many of these actions
are defined as war crimes.
"The knew they were weaker, but
they wanted them [the Israelis]
to fire on our houses, so they could
accuse them of war crimes,”
a resident of the Gazan village Tel Awa
explained.
Cremonesi said it was difficult to gather
evidence against Hamas because residents
were fearful. Civilians feared that if it
was known they spoke against the group,
they would be harshly punished, he explained.