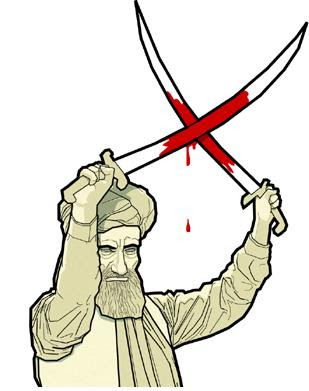 Muslimska Brödraskapet har vi haft anledning
skriva om ofta. Just nu finns det anledning att
påminna om att Hamas inte är något annat än
Brödraskapets gren i Israel....
Islamistexperten Douglas Farah skriver i sin
blogg:
The Role of the Muslim Brotherhood With
Hamas and Iran
Former CIA analyst Reuel Marc Gerecht has
an important piece in the Wall Street Journal
on Iran’s Hamas strategy.
The fundamental truth is that Hamas’ road to
Iran runs through the international Muslim
Brotherhood, and has for two decades.
What is often missing in the discussion of the
Muslim Brotherhood is that Hamas, according
to its own founding charter, is an integral and
armed part of the Ikwhan, not separate from it.
According to Article Two of the Hamas Charter:
“The Islamic Resistance Movement is one of the
wings of the Muslim Brotherhood in Palestine.
The Muslim Brotherhood Movement is a universal
organization which constitutes the largest Islamic
movement of modern times. It is characterized by
its deep understanding, accurate comprehension
and its complete embrace of all Islamic concepts
of all aspects of life, culture, creed, politics, economics,
education, society, justice andjudgment, the spreading
of Islam, education, art, information, science of the
occult and conversion to Islam.”
The most open analysis of the relationship of the
Brotherhood to Iran comes from the public interviews
of Yousef Nada, the self-described foreign minister
of international Muslim Brotherhood.
Unfortunately, there is no English language link to
the extraordinary series of statements he gave.
In a series of interviews he gave to al Jazeera in late
2001 and 2002, Nada described how the Ikhwan sent
a delegation to Tehran immediately after Khommeini
assumed power in 1979. He states that the MB
delegation was the third plane to land in Tehran after
the revolution-the first was Khommeni’s, then security
from the PLO, and then his.
As the Brother in charge of relations with Iran, he
tells how his group worked with the Iranian revolutionary
regime, and how he personally tried to mediate an end
to the Iran-Iraq war. In these endeavor, he worked
extensively with Saddam Hussein and the Iranian
leadership.
**
Läs hela artikeln
****
VG 2 3 4 5 6 7 8 9 10 11 12 13 Pol
Dagbladet 2 3 4 5 6 7 8 9 10 11 12 13 14 15 16 17 18
SvD 2 3 4 5 6 7 8 9 Sydsvenskan 2 3 4 5 6 7 8
ETC 2 3 4 5 6
DN 2 3 4 5 6 7 8 9 10 11 12 13 Dagen 2 3 4 5 6
Barometern 2 3 4 5 6 7 8 9 10 11 12 13
SmP 2 3 4 5 6 7 8 9
HD 2 3 4 5 6 7KrB 2 3YA 2 3TrA 2 3
Upplagd av hcp kl. 13:56