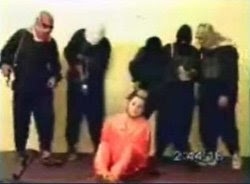 Först en positiv nyhet: Holländske justitieministern
förbereder åtal mot den senaste tidens Hamas-
demonstrationer i landet. I varje fall i Amsterdam,
Rotterdam och Utrecht har islamister använt slogan
Hamas, Hamas ! Gasa judarna !
Demonstranterna kommer att åtalas för antisemitism
och anstiftan till hat och våld. Bland dem finns den social-
demokratiske parlamentarikern Harry van Bommel.
Ett sådant initiativ vore kanske något för justitie-
minister Ask ?
**
I Pajamas Media skriver Sören Kern:
A second front to the conflict in the Gaza Strip has opened
up in Europe, where a wave of reprisal attacks against
Jewish targets is stoking fears of a wider resurgence of
anti-Semitism on the continent. Far from simply being a
spate of isolated incidents, as many Europeans claim, anti-
Semitic violence is becoming more commonplace in every
country in Europe. At the same time, anti-Israel
demonstrations, which have strong anti-Semitic overtones,
are being held with alarming frequency in cities across
Europe.
In France, the National Bureau of Vigilance Against Anti-Semitism
says it has received more than 100 reports of anti-Semitic
violence since the start of Israel’s military operation in Gaza
on December 27. Recent incidents include arson attacks
against synagogues and Jewish community centers in
several French cities, as well as physical assaults of Jews in Paris
and elsewhere.
In Britain, the Community Security Trust has reported a
sharp increase in anti-Semitic attacks in recent weeks.
Incidents include arson attacks on synagogues, physical
assaults of Jews in London, and anti-Semitic graffiti
scrawled in towns and cities across the country.
British police have also advised prominent British Jews
to redouble their security arrangements after some of
their names appeared on a “Jewish hit list.”
In Denmark, two Israelis were shot and wounded in a
shopping mall in Odense. In nearby Vollsmose, a public
school principal declared that Jewish students are not
welcome at his school and advised Jewish parents to
send their children elsewhere.
The principal is an active supporter of the Danish Boycott
Israel campaign, which specializes in organizing anti-
Israel protest marches in Copenhagen and elsewhere.
In Italy, the leader of a far-left trade union has called
for a boycott of all Jewish shops in Rome.
According to union leader Giancarlo Desiderati, the
organization has already urged its members to blacklist
Israeli products, and boycotting Jewish-owned or Jewish-
run stores is a logical next step.
In Belgium, where the number of anti-Semitic incidents has
surged in recent weeks, synagogues and Jewish schools
have been attacked in Brussels and in Charleroi, Jewish
community leaders have received death threats, and the
home of a Jewish family was the target of an arson attempt.
***
Läs hela artikeln
*
Ny attack mot judiska församlingen