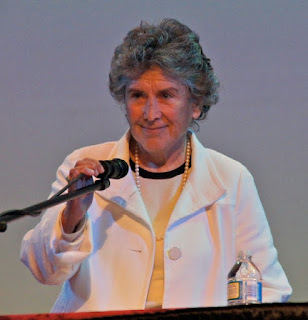 Franska Gallia Watch har intervjuat den
kloka historikern och filosofen Bat Ye'or
om Västerlandets kommande undergång.
Intervjun har översatts till engelska och
presenteras i två avsnitt:
"After the greetings, Christine asks her to explain Eurabia:
I didn't invent the term. It was the title of a journal that foreshadowed the situation today. Eurabia is an ideology that seeks to promote the fusion of the two shores of the Mediterranean and to eradicate the identity of the European peoples. Eurabia is two combats. One is the desire of the European Union to extend its power. When I speak of the European Union, I mean a whole system of functionaries who aim to abolish the European nations in order to construct a European Empire. This is an absurdity because this empire contains several languages, several histories, several identities, and you cannot destroy that. It is too rich too important,it would be a terrible impoverishment. This vision of the European Union is part of the globalist agenda to replace the nation-states with a world government that would be the United Nations, an international center that would promulgate laws for the entire planet. This is very clear from the speeches of Javier Solana, from his desire to strengthen the U.N. by weakening the European States. This is part of a humanist aspect of Communism: they want to recreate a fraternal humanity, without borders, without divisions, subject to the same laws, in which everyone is equal, everyone is kind and gentle, and in which the differences between the peoples would disappear. It's a little like what the Soviet Union wanted to do.

That is one aspect of Eurabia. The other aspect is the union with the Arab world, the creation of a Mediterranean civilization, which is a step towards the larger phase of globalization. This globalization will take place as the civilization continues to expand, leaving the domaine of nation-states, and taking in more and more different peoples, uniting with other continents and peoples. This is an intermediate step towards a supranational state that would mean the destruction of Europe in order to bring in the other nations.
We find this in the works of Carl Bildt, and other important politicians of the 70's, 80's and 90's. We see that Eurabia has several levels, and what I studied in my book Eurabia is another phenomenon: the destruction of Europe which is in parallel with an historical movement - the destruction of Judeo-Christian States by Islam. This aspect is different but complementary.
It was my specialty to study the historical texts to determine how Judeo-Christian nations, that had no Muslims, that didn't speak Arabic or Turkish, how did these nations, that represented the heights of civilization, such as Egypt with Alexandria as its capital, and Byzantium, become Islamized? What were the processes that led the people who were largely Christian to become Muslims and begin to speak Arabic or Turkish, and also Central Europe - don't forget the Turkish Empire went almost as far as Vienna - and Hungary and the Balkans? It was an enormous empire. What brought about the transformation of Christian nations?
There were two primordial levers that led to the transformation - jihad and sharia. Jihad is an ideology. There is no equivalent in Christian civilization. It doesn't exist. To understand jihad you have to read the Islamic texts to see the difference. Because European colonization was not a jihad, it was completely different. The Europeans left after one century.

Now we are back in an era of very active jihad and sharia, and now sharia, with the so-called Arab Spring, will be applied in all Muslim countries. We are in a period of jihad in all of its forms, some peaceful, such as immigration, such as certain Islamic precepts and concepts that are very important, for example, what we Westerners would call the destruction of history. For us history consists of events that can be proven, dated, and verified by archeological evidence, or some other kind. But in Islam, history is whatever confirms the Koran. It is religious history, not history in the sense of Greek, Western or Cartesian rationalism. And we are in the process of renouncing our history, our conception of history to adopt an Islamic conception of history. Obviously this has repercussions on our identity, on our culture, and so gradually, without realizing it, we are entering into a process of intellectual Islamization. Through the schools, the teaching, and this is promoted by our own State authorities. There is also another very important element in the transformation of Christian nations into Islamic nations, this is what I call dhimmitude, a system of laws regulating the status of populations conquered by Islam: Christians, Jews, and non-Muslims, and these laws established a permanent feeling of insecurity. That is to say, these populations were protected by Islamic law in a status of permanent insecurity, and humiliation and violence.
She describes how Islam uses constant attacks (as in Gaza) to strike permanent fear into the populations, who are forced to abandon their lands. Islam then moves in closer and closer to those lands that have not been Islamized, lands that must be conquered by war.
So there is this past of wars, conquests and slavery that is not spoken of. Islamic slavery is religious slavery, not necessarily racial. Non-Muslims were destined for slavery. Then there is the past history of very violent conquests, exterminations, genocide - such as the Armenian genocide, and I believe we are a bit responsible for the current situation, in particular our governments, because instead of denouncing these facts as we do with Western history - we speak of the genocide of the Jews, and all sorts of genocide that we have committed, we speak of the massacres during the war, and of slavery. Instead of doing this with the Muslims, on the contrary we have taken refuge in denial. Which means that we have not allowed this people to develop self-critical thinking and to arm themselves against a return of the past. In this respect, we are to blame as well.

Because as I write, the West is a victim of jihad. But the victim has a duty towards his oppressor, this duty is to bear witness. It is important for the victim to teach his oppressor about the evil he is doing. But if the victims repeat constantly, for example to the Palestinians, that they are wonderful, as the prelates, the heads of the churches do in the Middle East, even though the Palestinians represent the avant-guard of anti-Western, hence anti-Jewish jihad… You need a lot of courage, but I understand why they do not have courage, why they cannot speak. But perhaps in the West, the time for talking has passed. But there was a time for words, a time for bearing witness of the suffering of the victims, for humanizing the oppressor and for curing the oppressor. My books on dhimmitude are the testimony of the victim. It is very important for this testimony to be accepted and supported by the oppressor. There are Muslims who reject this past and seek a form of modernization, in order to set the good Muslim on the path of modernization and rejection of the past.So there is the problem of Eurabia, which is the problem of the destruction of our civilization. In my book I examine the mechanisms that led our nations to self-destruct and to betray their own people. How did this happen? What collusion took place? What forces were at play? There are of course many elements in this Titanic, this culture and civilization that are in the process of collapsing before our eyes.
This is Eurabia.