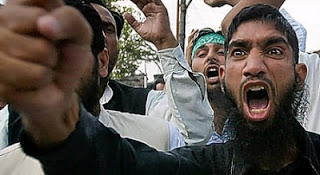 Frontpagemag apropå den senaste
terroristhärvan i Frankrike.
Salafisternas antisemitism är ren
rasism och inget annat...
"French authorities ban racial and
religious statistics, yet most anti-
Semitic attacks perpetrated in
recent years evidently were com-
mitted by young Muslims.
This is not Anti-Zionism and there
is increasingly no room for more
of the equivocation over Israeli
policies.
This is a war against Jews for
being Jews. It’s the essence
of racism that is written into
the ideological DNA of Islam."
**
"French police who raided an Islamic
terror cell over the weekend found
documents showing the ring was
planning new attacks against the
Jewish community: 27,000 euros in
cash, a list of Jewish organizations in
the Paris area, ammunition, Islamist
manuals and “extremely” anti-Semitic
documents. But authorities say that
even after the raid, there are still sev-
eral similar anti-Semitic cells across
the country.
**
“Radical Islamism … thrives on fantasies,
on hatred towards our country and towards
French Jews,” said Interior Minister Manuel
Valls, who warned that these small local cells
are even harder to fight than international
jihadist movements.
“It’s all the more difficult to battle against
these groups when they’re local.
They’re not foreign terror networks that
come from outside, but networks that
have grown in our country, our neighbor-
hoods. They’re not foreigners but French
converts, French Muslims.”
**
Till slut, ett nyttigt tips till SÄPO om sam-
bandet mellan en salafist och hans skägg:
Louis-Sidney came under the radar when he
traveled to North African countries to meet
with local imams, and started preaching
radical Islam to younger Muslims.
Interior Intelligence then added him to the
jihadist threat list, although unlike Merah,
he’d never been to a jihadist training camp
abroad.
When police noticed he had shaved his
beard on Friday, a day before the raid,
they decided to act quickly.
“Until then he had a thick beard. Shaving
it can mean an Islamist is about to turn
to action,” said Strasbourg prosecutor
Poirret.