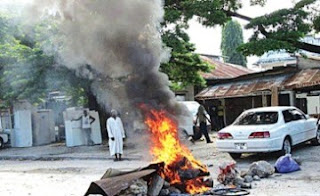 Tanzanias katolske biskop Bernadin Mfumbusa
varnar för den snabba islamiseringen av landet.
Trots att Tanzania är ett i grunden kristet land
utsätts religions- och yttrandefriheten för ett
allt starkare tryck från intoleranta muslimska
invandrare från grannländerna.
Man kräver bl a införande av sharialagstiftning,
även inom straffrätten..
**
“We see more and more itinerant preachers from
Saudi Arabia and Sudan entering this country –
and Muslims are increasingly making political
demands.”
These demands include extending Islamic
Sharia law and making everyone subject to it
– Muslim and non-Muslim alike.
Bishop Mfumbusa said: “In recent times there
has been a constant demand to introduce
Shari‘a into other parts of Tanzania which do
not have a majority of Muslims.”
Sharia law is already in force in Zanzibar,
a semi-autonomous archipelago with an
almost completely Muslim population,
but it does not apply to other parts of
the country.
**
The bishop said there were calls for Sharia,
which currently applies in areas of civil law
such as marriage and inheritance, to be
extended to cover criminal law.
“They claim that otherwise Muslims would
be able to avoid the law by claiming not to
be Muslim.
“To prevent this they say Sharia law must
be made applicable to everyone.”
(....)
Bishop Mfumbusa described how the influence
of radical Islam can be seen on the country’s
streets.
He said: “In many parts of the country more
veiled women than in the past can be seen,
among them small girls.”
The bishop added: “Verbal attacks are also
on the increase,” but stressed that to date
there had been no violent attacks in Kondoa
Diocese.
He said that education is not only being
radicalised but even Catholic schools can
face difficulties.
“In the church schools, which are also
attended by Muslim children, we must be
very sensitive and cautious to avoid any
undesirable incidents,” said Bishop Mfumbusa.
The number of madrassas – Qur’anic schools –
has also grown, with more extremist ones
encouraging pupils not to attend regular
schools, which is compulsory in Tanzania
Upplagd av hcp kl. 09:00