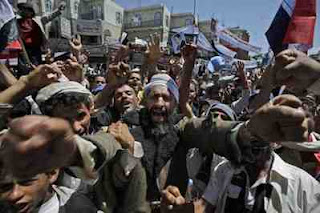 Apropå de senaste veckornas muhammedanska
kravaller runt om i världen skriver Barry Rubin
om islamisternas olika sätt att gripa och behålla
makten.
**
"It's about Islamists seeking power by
fostering hatred of the West, he writes,
and "not some act of Islamophobia."
"As long as free speech exists in the West,
there will always be events that provide
pretexts for outrage. Radical Islamists
will make sure that even the most ob-
scure of events can be used."
**
–The very numerous Islamists and lots
of mainstream Muslim clerics and intell-
ectuals stir up hatred of the West every
day even when you aren’t watching.
You see the demonstrations outside the
embassies but you do not see the lessons
in the classrooms, the sermons in the
mosques, the articles on the websites,
and all of the myriad ways that hatred
is spread and radicalization carried out.
And virtually no one dares dissent —
or they would be quickly shouted down
and threatened with death — except in
the little ghetto enclaves of liberals
and in the few more balanced news-
papers and less radical television stations.
**
There is no end to their list of grievances.
You can’t deny them an opportunity to
make anti-Western, anti-American, and
anti-Christian propaganda because they
will find one or invent one.
You cannot appease someone who is totally
determined never to be appeased and who
prefers to advance step by step to total
power, the fundamental transformation of
their societies, the destruction of Israel,
and the expulsion of the United States
and all of its interests in the area stretch-
ing from Morocco through Indonesia
And as the Westerners waste time, ink, and
conscience on “What did we do wrong?”
and “Why do they hate us?” and
“How can we prove we really love
Muslims?”
the radicals go on arming and organizing.
The ultimate irony is that even if America
gives them guns (Libya, Syria) and money
(Egypt, Pakistan), or intervenes diplomatically
on their behalf (Gaza Strip), or proclaims them
the absolute best of buddies (Turkey), this will
make not one iota of difference.
**
Imagine a capitalist trying to win over a
convinced communist, or a Jew trying to
convert the anger of a confirmed Nazi into
friendship. At any rate, even the most
clever act of contrition or politically correct
statement will end up being filtered through
the Middle Eastern society and the determined
Islamist (and nationalist) propaganda
interpretation.
***
Läs hela artikeln
Upplagd av hcp kl. 12:00