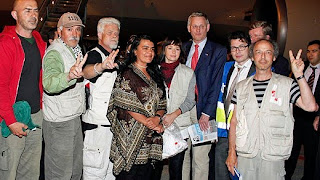 Sheikh Hussein bin Mahmud, en av
de mest inflytelserika salafistiska
imamerna, kommenterar Ship to Hamas:
**
"Gaza… Is Thirsty and Wants to Drink
the Blood of the Sons of Apes and Pigs"
"Gaza will not agree to a ceasefire with
the Jews.
On the contrary – it is thirsty and wants
to drink the blood of the sons of apes and
pigs, and it is hungry and longs to devour
the body parts of these cowards.
Proud Gaza calls to the Muslims, [saying]
that it does not want people to defend
it, but rather wants people to set out
from it to liberate Palestine and to expel
the accursed Jews.
**
"Gaza does not want 'freedom ships' bearing
blonde women with Muslim, Christian, Jewish,
and atheist men; it wants a naval fleet and a
land army [bearing] black Islamic banners
that are Khorasani [i.e. Afghan], Syrian, Egyptian,
Maghrebi, Yemeni, Turk, and Kurdish, set east of
the Jordan River with the Jews to its west, with
sparks flying from the eyes of the Muslims...
**
"Our problem is not Gaza, but [all] Palestine.
[Our problem is with] those who protect the
Jews from outside its borders, and prevent
the mujahideen from entering Palestine to
wage jihad for the sake of Allah and to
liberate our holy lands. Thus, we say to the
mujahideen: Those who want to enter Palestine
and fight the Jews must start first [by fighting]
the border guards [i.e. the Arab regimes], so
as to protect their rear – because a wise man
does not leave his rear exposed to his enemy.
It is not forbidden to kill the Jewish state's
border guards, even if they pray and fast..."
**
"When has freedom ever been attained without
fighting? When has honor ever been available
for purchase in the market of betrayal and
humiliation?
When has glory ever been granted [to someone]
apart from on the battlefield?... ...
[But in fact] the shari'a obligation is to declare
jihad for the sake of Allah, in order to liberate
Palestine from the hands of the Jews and return
it to the hands of the Muslims.
This is the shari'a obligation that no country
that claims to be Muslim can evade...
**
"Gaza does not need all this media coverage…
Gaza needs bombs, bullets, iron, fire, missiles,
tanks, mines, and missile launchers held on
the shoulders of lions such as [the Arab
commanders in Chechnya] Thamir Al-Suweilem
('Khattab') and Abu Al-Walid Al-Ghamdi, Abu
Mus'ab Al-Zarqawi and Yahya Ayyash...
It needs extraordinary leaders such as Osama bin
Laden, Mullah Muhammad Omar, Abu Omar
Al-Baghdadi, and Shamil Basayev…"
**
Hitler Left Some Jews Alive So the World Could
See Why He Killed the Rest
"Everyone who has had contact with them
and lived alongside them, in the East and
in the West, has spurned them, loathed
them, and detested them, to the point where
Hitler said: I could kill all the Jews in the world,
but I left a few alive so that the entire world will
know why I killed the Jews…
**
"Given that these are some of the Jews'
characteristics, what were the members of
the Freedom Flotilla expecting from them?...
"Those people who have condemned the
mujahideen's… marytrdom operations, calling
them 'suicide operations,' would do well to
abandon the idea of flotillas like these, which
are truly suicide in the full sense of the term.
****
svd, svd. svd, svd, sds, sds, dag, dag, dag, gp, gp, svd, gp
Upplagd av hcp kl. 10:00