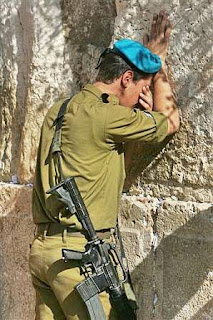 Vid en arabisk attack mot en polisbil
nära den judiska staden Hebron i mose
dödades en israelisk polis och sårades två.
Invånarna i området påpekar att regeringen
låtit avlägsna en vägspärr nära platsen för
överfallet för tre veckor sedan. Det gjordes
enligt uppgift som en goodwillgest mot Fatah...
***
Arutz Sheva återger några alldeles normala
händelser från Israel:
On Sunday night, a resident of the Samaria
town of Alei Zahav was ambushed and
brutally attacked by PA Arabs while driving
near the town of Nachal Shilo.
The victim, who is physically handicapped,
noticed a car with police lights signaling him
to stop. When he pulled over, PA Arab men
dragged him from his car, beat him, and stole
his vehicle, leaving him at the side of the road.
The victim was taken to a hospital in light
condition.
Members of the Samaria Regional Council
noted that in order to reach the site of the
attack, the attackers had passed by what
used to be an IDF checkpoint. The checkpoint
was recently removed as a gesture to the PA.
**
On Friday, a Palestinian Authority terrorist
rammed into two Border Police officers with
his car in the Wadi Joz neighborhood of Jerusalem.
Both officers suffered light wounds. The driver
was shot and killed by other officers as he
attempted to escape. Police spokesmen said
officers had attempted to stop him by firing
in the air, but began aiming directly at him
when he ignored their warnings.
His family managed to steal his body from
the hospital, and apparently planned to bury
it near the Al-Aksa mosque on the Temple Mount.
**
Also on Friday, a woman and her three children
were ambushed by a rock-throwing mob in the
same area; she slammed on the gas and escaped,
after being hit in the head by one of the rocks.
She received stitches in Hadassah Hospital.
****
Kommunledningen i Otniel säger i ett
uttalande:
“Those who opened, just less than a
month ago, the Dahariya checkpoint, with
the knowledge that the place would become
a refuge for murderers, cannot now lift his
eyes heavenward and say, “Our hands did
not spill this blood.’ Just a few years ago on
this very route there were several attacks,
but once the Dahariya route was blocked,
we saw a drastic drop in such attacks.
Once again, we see that ‘goodwill gestures’ to
the Palestinian Authority cost us in blood.”
Upplagd av hcp kl. 11:30