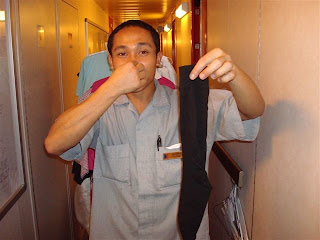 have had great success also in ,

claims that an soldier must have

stolen his socks when he was retained

by the IDF upon his forced arrival in

on board one of the Ships to

In a two-page spread in the large Swedish

he describes his ordeal written in the style

of one of his exciting criminal novels.

Towards the end he says that ”the myth

of the courageous and also infallible Israeli

soldier has been crushed. Now one can add

that they also are simple thieves”.

There may be at least three other

explanations why Mankell lost his socks.

Someone may have taken them as a souvenir.

What a conversation piece: the socks of

famous criminal writer Mankell. Although after

having been in use for six days, they might

have to be embedded behind glass or in plastics.

Another explanation is that the well-used

socks were taken away in the mistaken

belief that they were some chemical weapon.

A third explanation could be that one of the

wash them for him but then could not return

them to him before his forced departure

He got a new pair by the Lufthansa stewardess.

Who knows who the villain was until the last

Mankell makes the following remark upon

meeting a couple of girls among the soldiers:

“Maybe they are such who will escape to

and get drugged when their military

service is over? It happens all the time.”

He also says that he considers halting

any further translations of his books into

Hebrew. How much has he earned so far

in royalties in the country that he despises