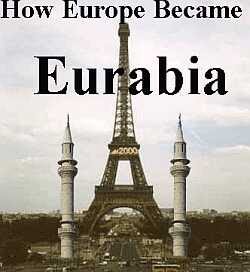 A blog novel by Ruth Francisco titled
'Amsterdam 2012'
It is a thriller about a young woman
who witnesses a murder that starts
a Muslim rebellion in Amsterdam,
which touches off riots throughout
Europe and leads to the
Great Eurabian War -- World War III.
***
Några smakbitar:
"Just as soon as Amsterdam seemed to be
settling down and the curfews and military
presence seemed to be quieting the population,
renewed violence broke out across the city.
The city was paralyzed by Islamic riots and
demonstrations. A local Salafi Imam, Fawaz
Jneid, declared that the Muslim Slotervaart
district, home of Mohammed Bouyer, the
murderer of Theo Van Gogh, was now under
Islamic law.
Utrecht was taken over by Islamists, who
stormed local government buildings and
burned them to the ground.
In The Hague, a group of officers of Islamic
descent led the army in a coup. The ranks of
the military, which were forty percent Muslim,
overran the House of Parliament and local
administrative offices, replacing local police
with members of the Muslim Brotherhood
and Al Queda.
They liberated all Muslims held in prisons or
jails, which was seventy percent of the prison
population.
A Muslim militia crossed the land putting local
imams in charge. Salafists declared Holland an
Islamist regime, and Imam Fawaz Jneid was
declared “emir of the faithful.”
***
Civil unrest spread to Northern European
Countries that had large non-integrated
populations of Muslims: Iraqis and Iranians
in Sweden, Pakistanis in Norway, Turks in
Denmark. Only Finland and Iceland, with
almost no Muslims, remained unscathed.
***
The first city outside of Holland to fall was
Malmö. Sweden’s third largest city, which
was forty percent Muslim, declared itself
an Islamic State. Within days imams in
Muslim communities throughout Europe
also declared their neighborhoods “Islamic
Jurisdictions”: in Roubaix, France; in Bradford,
England; in Copenhagen, Denmark; and in
the Sint-Jans-Molenbeek neighborhood of
Brussels.
***
The French military continued to battle
guerilla wars in urban areas. Muslim
refugees, fleeing Belgium and Germany
into France and Switzerland, were turned
away at the borders. They had nowhere to
go, open targets for vigilante groups.
Hundreds were killed.
***
Läs berättelsen
Amsterdam 2012
Upplagd av hcp kl. 07:00