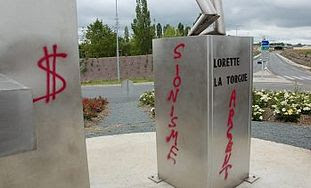 Arutz Sheva rapporterar:
A new wave of anti-Semitism in France
spread to the city of Marmande, where
vandals desecrated a memorial to Jews
deported by Nazis. The attack follows
two recent attacks on kosher stores
and Jewish graves.
**
As the rampage continues, French Interior
Minister Brice Hortefeux expressed
“horror and sadness” after the latest
desecration. The mayor of Marmande
pointed the finger at Holocaust deniers
who smeared the words “lies,” “Zionism”,
“interests” and the dollar sign “$” in red
paint on the monument that bears the
names of Nazi concentration camps.
**
Hortefeux said that the anti-Semites
"clearly targeted the memory of the
deportees and the Jewish community
of France. I am more than ever determined
to fight against all racism and all forms [of]
extremism.”
**
Official statements denouncing the new
wave have not stemmed it. Last week,
the Union of Jewish Students in France
(UEJF) described attacks on kosher stores
as a “new demonstration of anti-Semitic hatred.”
Swastikas had been discovered at a dozen
kosher stores in Paris and on the wall of a
Jewish school and a nearby building.
**
Three weeks ago, vandals in eastern France
smashed or overturned 27 gravestones at
the Jewish cemetery of Wolfisheim, near
Strasbourg.
More recently, anti-Semitic slogans and
Nazi swastikas were discovered on the
walls of the Etz Chaim synagogue in Melun,
located in central France. In January, some
30 gravestones were vandalized, including
18 painted with swastikas and 13 overturned,
and the German phrase “Juden Raus” (“Jews
out”) was written on one of the tombstones.
**
Last year’s annual report on anti-Semitism
reported a 75 percent increase over incidents
in 2008.
Part of the increase was attributed to Israel's
Operation Cast Lead campaign against the
Hamas terrorist infrastructure in Gaza, but
demographers have also noted the rapid
increase in the Muslim population in France.
An estimated five to six million Muslims lived
in France in 2003, according to the French
Interior Ministry. The number had climbed
to an estimated eight million, according to
Odile Jacob's Intégrer l'Islam.
In 2008, there were some 490,000 Jews living
in France, according to a survey by Professor
Sergio Della Pergola of the Jewish People
Policy Planning Institute and the Harman
Institute of Contemporary Jewry at Hebrew
University.
****
Läs också
Judisk begravningsplats
skändad i Frankrike
*
Marockan gripen för antisemitiskt
överfall i Frankrike
*
En kippa kan betyda döden...
*
Antisemitiskt Intifada-mord i Paris
*
Nya antisemitiska dåd i Frankrike
*
Utbrett judehat bland muslimska
invandrare i Danmark
*
82,6 % antisemiter -
"en markant skillnad"??
Upplagd av hcp kl. 07:00