A Muslim victim of 9/11: 'Build your mosque somewhere else' 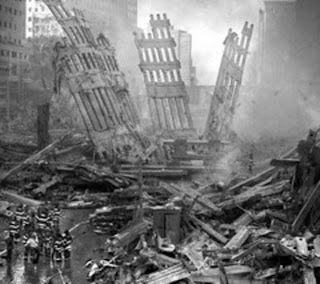 En exil-iranska, fördriven från sitt
land av mullorna, miste sin mor i
ett av de kapade flygplanen 9/11.
Läs vad hon tycker om den bisarra
idén att minnas islamisternas mass-
mord genom att bygga en moské:
**
I have no grave site to visit, no place to
bring my mother her favorite yellow
flowers, no spot where I can hold my
weary heart close to her. All I have is
Ground Zero.
On the morning of Tuesday, Sept. 11,
2001, I watched as terrorists slammed
United Flight 175 into the South Tower
of the World Trade Center, 18 minutes
after their accomplices on another
hijacked plane hit the North Tower.
My mother was on the flight. I witnessed
her murder on live television.
I still cannot fully comprehend those images.
In that moment, I died as well. I carry a
hole in my heart that will never be filled.
From the first memorial ceremonies I
attended at Ground Zero, I have always
been moved by the site; it means some-
thing to be close to where my mother
may be buried, it brings some peace.
That is why the prospect of a
mosque near Ground Zero --
or a church or a synagogue or
any religious or nationalistic
monument or symbol -- troubles
me.
I was born in pre-revolutionary Iran.
My family led a largely secular existence --
I did not attend a religious school, I never
wore a headscarf -- but for us, as for
anyone there, Islam was part of our heritage,
our culture, our entire lives.
Though I have nothing but contempt for
the fanaticism that propelled the terrorists
to carry out their murderous attacks on
Sept. 11, I still have great respect for the
faith. Yet, I worry that the construction
of the Cordoba House Islamic cultural
center near the World Trade Center site
would not promote tolerance or understanding;
I fear it would become a symbol of
victory for militant Muslims around
the world.
***
Läs hela artikeln i Washington Post
Upplagd av hcp kl. 16:30