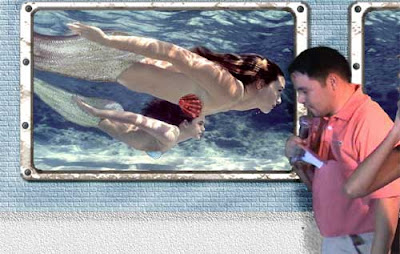 Ibn Hazm (may Allaah have mercy on him) said in al-Muhalla (6/50): As for that which lives in the water and cannot live anywhere else, it is all halaal no matter what state it is in, whether it is caught alive and then dies, or it dies in the water and then floats or does not float, whether it was killed by a sea creature or a land animal. It is all halaal to eat, whether it is the pig of the sea (i.e., a dolphin), a mermaid, or a dog of the sea (i.e., shark) and so on. It is halaal to eat, whether it was killed by an idol-worshipper, a Muslim, a kitaabi (Jew or Christian) or it was not killed by anyone. The proof of that is the verses in which Allaah says (interpretation of the meaning): “And the two seas (kinds of water) are not alike: this is palatable, sweet and pleasant to drink, and that is salt and bitter. And from them both you eat fresh tender meat (fish)” [Faatir 35:12] and “Lawful to you is (the pursuit of) water game and its use for food — for the benefit of yourselves and those who travel” [al-Maa’idah 5:64]. Allaah spoke in general terms and did not exclude anything, “and your Lord is never forgetful” [Maryam 19:64]. End quote.

Al-Durayr – a Maaliki scholar – said in al-Sharh al-Sagheer (2/182): Sea animals in general are permissible, whether it is dead meat or a ‘dog’ (shark) or a ‘pig’ (dolphin), and they do not need to be slaughtered properly. End quote.

Al-Saawi said in his commentary on that: The words “or a ‘dog’ or a ‘pig’ also include a ‘human’, referring thereby to mermaids. End quote.

Shaykh Ibn ‘Uthaymeen (may Allaah have mercy on him) said, after stating that it is more likely that it is permissible to eat crocodiles and sea snakes: The correct view is that nothing is excluded from that, and that all the sea creatures which can only live in water are halaal, alive or dead, because of the general meaning of the verse – i.e., “Lawful to you is (the pursuit of) water game and its use for food” [al-Maa’idah 5:64]. End quote from al-Sharh al-Mumti’ (6/327). Fajr edition.