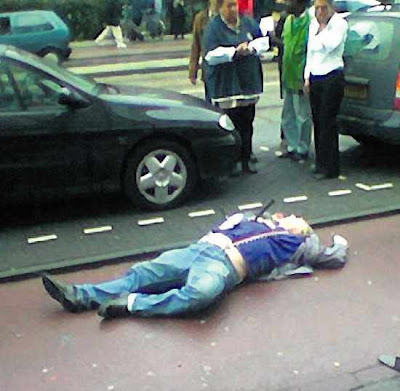 Ett par värdefulla artiklar om Takfirrörelsen:
***
Takfir wal Hijra may target Europe
(AFP 1 febr 2005)
Militants of the banned Islamist radical movement Takfir
wal Hijra maybe preparing to carry out strikes in Europe,
the leading defence journal Jane's Intelligence Review has
said.
"Al Takfir wal Hijra now presents perhaps the most pressing
security concern," warned the magazine. It added that the
group was "sometimes mistakenly associated as an affiliate of
the Al-Qaeda network".
"There is a growing fear that the Takfiri are mobilising to carry
out further operations in Europe," Jane's warned in Monday's
edition. According to the magazine, the group helped carry out
the Madrid trainbombings in March 2004, which left 191
people dead in the country's worst terrorist attack.
The suspected murderer of the Dutch filmmaker Theo Van Gogh,
who was shot and stabbed to death on the streets of Amsterdam
last November,is also thought to belong to the movement,
according to Dutch authorities.
"The relationship between crime and terrorism has provided
Takfiri militants in Europe with the resources required to fulfill
their goals of propaganda and recruitment," Jane's said.
"There is growing evidence to suggest that the European based
cells are becoming operational," it added.
Jane's said the group had operatives in Britain, France, Italy
and Germany and that "the UK is believed to be a major transit
point forTakfiri recruits".
***
New Breed of Islamic Warrior Is Emerging
Evidence in Madrid Attack Points to Takfiris,
Who Use Immigration as a Weapon
(Wall Street Journal 29 mars 2004)
Evidence in the Madrid train bombings points to the participation
of a new breed of Islamic holy warrior, unfettered by many of the
religious and ideological constraints that defined Islamic terrorism
in the past. These Islamist warriors -- schooled in the North
African doctrine known as Takfir wal Hijra and trained by Afghan
veterans of al Qaeda -- think, recruit and operate differently
from traditional Islamist networks.
For Europe, that makes the threat particularly acute.
The Takfir movement is strongest in Morocco and Algeria,
the primary sources of Muslim immigration to Western
Europe.
Takfiri theorists openly advocate using immigration
as a Trojan horse to expand jihad, or holy war.
Investigators have yet to pin definite blame for the Madrid attacks
on any one group.
Attention has focused on the Moroccan Islamic Combat Group as
well as several other al Qaeda splinter groups. Moroccan officials
say the leading suspect in the Madrid bombings, Tangier-born
Jamal Zougam, is Takfiri.
**
Friday, German prosecutors said police in Darmstadt, near
Frankfurt, raided an apartment used briefly last October by
one of the suspects arrested last week in Spain. The 28-
year-old Moroccan had applied to live and study in Germany
but was turned down. Spanish police on Saturday also found
a safe house outside Madrid where they believe the backpack
bombs were prepared; fingerprints from two jailed suspects,
including Mr. Zougam, were found in the house.
Many elements common to the suspects in custody for the
Madrid bombings so far, investigators say, bear hallmarks of
the ultrafundamentalist Takfiris or their close cousins, the
Algerian-based Salafists. These include the use of petty crime
and drug trafficking to raise funds, the recruitment of women,
and operatives who adopt a Western lifestyle to keep a low
profile. The virulent brand of Takfiri Islam makes all-out
armed jihad an obligation for all true believers; even apostate
fellow Muslims are fair game.
**
Some previous al Qaeda attacks also have borne Takfiri signs:
Mohammed Atta, one of the Sept. 11 hijackers, is believed by
some European investigators to have been a follower of the
Takfiri creed. He and several others of the so-called Hamburg
cell that organized the attacks on the U.S. led a typical clean-
shaven Takfiri lifestyle in the West and moved around
undetected for years. Now, the Takfiri ideas are spreading
throughout North Africa and into Europe, merged into a
deadly combination with leadership by trained mujahedeen,
or holy warriors.
Some youths are being taught that the ultra-radical Takfiri
strain is the only true Islam.
***
Läs resten av artikeln
Upplagd av hcp kl. 16:00