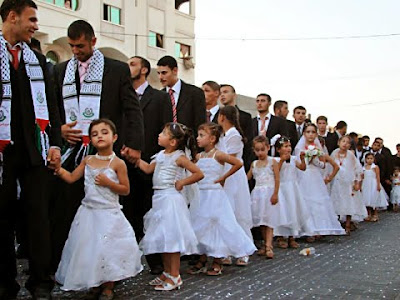 Ytterligare några reflexioner över
Gaza: 450 pedofiler får en brud....
och
Hur Hamas stoppade nyheten
om barnbröllopet
****
FrontPageMag har i en utmärkt artikel
gett historisk bakgrund till det som ut-
spelades i Gaza:
The International Center for Research on Women now
estimates that there are 51 million child brides now
living on planet earth and almost all in Muslim countries.
Twenty-nine percent of these child brides are regularly
beaten and molested by their husbands in Egypt;
twenty six percent receive similar abuse in Jordan.
Every year, three million Muslim girls are subjected to
genital mutilation, according to UNICEF.
This practice has not been outlawed in many
parts of America.
**
The Islamic practice of pedophilia dates back to the prophet
Muhammad, who amassed eleven wives and many concubines
after the death of his first wife Khadijah in 619 A.D.
(.....)
This might not appear shocking to students of the Kinsley
Report, except for the case of Aisha, Muhammad’s favorite
wife. Aisha was the daughter of Abu Bakr, the Prophet’s
closest friend and most faithful follower.
As soon as Muhammad laid eyes on Aisha, he became
to fantasize of having sex with her. There was a problem
with this fantasy. Aisha, at that time, was a small child of four
or five, while Muhammad was a middle-aged man of fifty.
still and all, the Prophet wasted no time in making his
fantasy a reality. When Aisha turned six, Muhammad asked
Abu Bakr for his daughter’s hand in marriage.
Abu Bakr thought that such a union would be improper –
not because Aisha was a mere child but rather because
he considered himself Muhammad’s brother.
The Prophet quickly brushed aside this objection
by saying that the union was perfectly right in
the eyes of Allah.
Abu Bakr consented. And Muhammad took the little
girl as his new bride.
When they were married, Muhammad, in his mercy,
permitted Aisha to take her toys, including her dolls,
to their new tent.
The marriage was consummated when Aisha was nine,
and the Prophet fifty-three.
The three year waiting period was not caused by
Muhammad’s concern of sexually molesting a child but
rather by the fact that Aisha contracted some disease
which caused her to lose her hair.
****
Läs hela artikeln
***
En saudisk expert om barnäktenskap:
Upplagd av hcp kl. 12:30