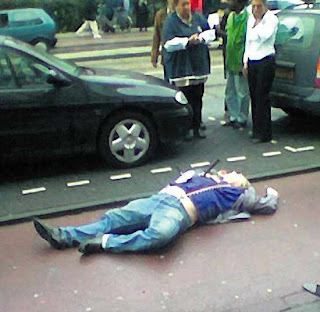 Den extreme salafisten och imamen
Jneid Fawaz stämmer Wilders i ett
civilmål för att Fawaz avslöjats som
extremist i filmen Fitna....,
berättar Klein Verzet.
**
Sheik Fawaz Jneid now appears to be
claiming the money for personality
rights and for damage incured by
defaming him.
He is the well known imam whose
as-Sunnah mosque mosque is de-
scribed by the Dutch intelligence
service as a place of dawa, a place
for democracy undermining activities.
In a book titled: Salaam (NL) from
reporter Patrick Pouw, the mosque
is depicted as a radical salafi center
attracting Muslim youngsters from
all over The Netherlands.
Law professor Afshin Ellian, in 2006,
even named the mosques imam the
most influential radial imam (NL) of
The Netherlands.
(....)
Fawaz Jneid was also called as an
expert witness by Geert Wilders
but has been rejected by the court
that handles the current trial against
Wilders. He is also the imam who
cursed Theo van Gogh in a sermon
a few weeks before he was slaught-
ered by Mohammed Bouyeri.
That same Mohammed Bouyeri was
also attending this particular sermon
and has heard the imam ask Allah:
"Cause Van Gogh a disease which all
the inhabitants of the earth are unable
to cure. Cause him suffering making
him long for death. Blind the sight of
Ayaan Hirsi Ali, give her brains a cancer.
Give her tongue a cancer."
***