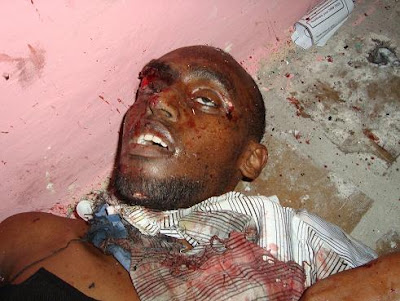 Burqamördaren Abdurrahman Hajji lyckades
nästan i sitt uppsåt att utplåna hela den somaliska
läkarkåren .....
Hur kan en ung man som genomgått hela den väster-
ländska utbildningsapparaten vilja vrida klockan
tillbaka till 600-talet ?
**
Mördarens far Hassan Hajji i Rödovre utanför
Köpenhamn talar ut i Jihad:
"First and foremost I pray for the deceased Somali
people who were the light of the nation who have
passed away in the suicide attack of Thursday the
3rd of December 2009, secondly I am clearly and
loudly saying that my son is a scapegoat, and I
don’t think that he will carry such evil act, in his
last phone call with me he told me that he is unable
to endure with the situation of Somalia, and is
willing to departure to Cairo, soon after his pregnant
wife in Marka delivers, and I told him that that
sounds good, my son came to Mogadishu and left
his wife in Marka, to do for her shopping before she
delivers, and my son Abdurrahman in Mogadishu
met with a friend of his who was among the medical
graduating students, and invited him to attend at the
graduation ceremony which was to take place in
Shamo hotel one of the most deluxe hotels in Mogadishu,
and my son has joined his friend without expressing
any hesitation, and the two friends were sited shoulder
to shoulder, enjoying the momentous event taking in
the well decorated hall, wobbling with distinguished
guests who were watching the lightening faces of the
graduating students in their black gown with the
yellow strips, and allover sudden there was an ear-
splitting blast which has claimed the lives of more
than 25 people, and among them was my son
Abdurrahman and he was considered as the man
who has carried out the act of suicide because he
was the only person who was unable to be identified
by the people in the hall, since his friend who has
invited him in the graduation ceremony has passed
away”
***
Det är väl inte så ovanligt att föräldrar till mördare
hävdar att sonen var "helt oskyldig"....
Försiktigtvis ger han inget svar på den naturliga frågan
varför Abdurrahman var utklädd i burqa
och högklackade skor....?
Kanske någon lokal tradition i Rödovre ?
***
Artikeln är fortsättning på
Burqamördaren nu på islamistisk reklamfilm
***
eb, pol, pol, vl, db, dag, svd, svd, sds
Upplagd av hcp kl. 12:00