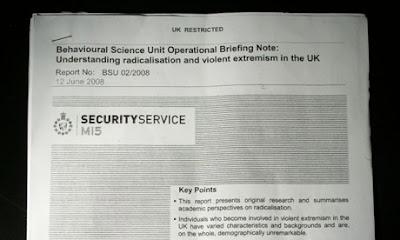 The Guardian publicerade på onsdagen en
hemligstämplad rapport från MI5, brittiska
säkerhetstjänsten, som analyserade hur de
"typiska" islamistiska terroristerna i Stor-
britannien ser ut. Slutsatsen är egentligen
att det finns inte så många gemensamma
drag....
***
The sophisticated analysis, based on hundreds of
case studies by the security service, says there is
no single pathway to violent extremism.
It concludes that it is not possible to draw up a
typical profile of the "British terrorist" as most
are "demographically unremarkable" and simply
reflect the communities in which they live.
**
The main findings include:
The majority are British nationals and the
remainder, with a few exceptions, are here
legally. Around half were born in the UK,
with others migrating here later in life.
Some of these fled traumatic experiences
and oppressive regimes and claimed UK
asylum, but more came to Britain to study
or for family or economic reasons and
became radicalised many years after arriving.
*
Far from being religious zealots, a large number
of those involved in terrorism do not practise
their faith regularly. Many lack religious literacy
and could actually be regarded as religious novices.
Very few have been brought up in strongly religious
households, and there is a higher than average
proportion of converts. Some are involved in
drug-taking, drinking alcohol and visiting prostitutes.
MI5 says there is evidence that a well-established
religious identity actually protects against violent
radicalisation.
*
The "mad and bad" theory to explain why people
turn to terrorism does not stand up, with no more
evidence of mental illness or pathological personality
traits found among British terrorists than is found
in the general population.
*
British-based terrorists are as ethnically diverse
as the UK Muslim population, with individuals from
Pakistani, Middle Eastern and Caucasian backgrounds.
MI5 says assumptions cannot be made about
suspects based on skin colour, ethnic heritage or
nationality.
*
Most UK terrorists are male, but women also
play an important role. Sometimes they are
aware of their husbands', brothers' or sons'
activities, but do not object or try to stop them.
*
While the majority are in their early to mid-20s
when they become radicalised, a small but not
insignificant minority first become involved in
violent extremism at over the age of 30.
*
Far from being lone individuals with no ties,
the majority of those over 30 have steady
relationships, and most have children.
MI5 says this challenges the idea that terrorists
are young men driven by sexual frustration and
lured to "martyrdom" by the promise of beautiful
virgins waiting for them in paradise. It is wrong to
assume that someone with a wife and children is
less likely to commit acts of terrorism.
*
Those involved in British terrorism are not
unintelligent or gullible, and nor are they more
likely to be well-educated; their educational
achievement ranges from total lack of
qualifications to degree-level education.
However, they are almost all employed in
low-grade jobs
***
Upplagd av hcp kl. 08:00