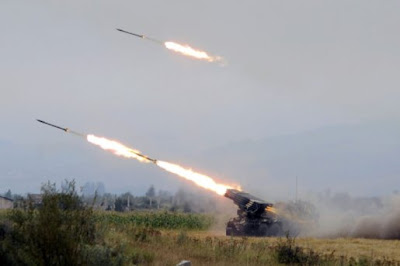 Presidenterna i de baltiska staterna
och Polen fördömde på lördagen i
starka ordalag den ryska aggressionen
mot Georgien och uppmanade NATO
och EU att motsätta sig den.
The former Soviet republics of Latvia, Lithuania and
Estonia and Poland, a client state of Moscow under
communism, are wary of a resurgent Russia using
its muscle to again dominate its neighbours.
**
"The European Union and NATO must take up
the initiative and oppose the spread of imperialist
and revisionist policy in the east of Europe,"
said the statement from the presidents of the
four countries.
**
The appeal followed Russia's bombing of Georgia
in the conflict over South Ossetia, where Russian
troops are backing separatists fighting a Georgian
attempt to bring the territory under control.
Georgia is another former Soviet state.
Moscow accuses Georgia of aggression and says it
is protecting its citizens in South Ossetia.
**
The statement from Poland and the Baltic
countries said they would use every available
means to ensure that Moscow's "aggression
against a small state in Europe is not passed
over in silence or with meaningless statements
equating the victims with the perpetrators."
**
Georgian President Mikheil Saakashvili has said the
conflict with the Russians could have consequences
elsewhere.
"They have claims to Crimea, in Ukraine, they have
claims to some parts of the Baltic countries, they
have claims to some parts of eastern Europe.
If you know, they have a free hand and free rights
here in Georgia everybody will be unsafe,"
Saakashvili said in the Georgian capital Tbilisi
yesterday.
***
(Times of Malta)
Upplagd av hcp kl. 00:05