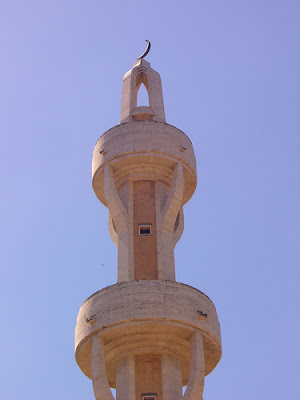 Italienska polisen har idag sprängt en
stor jihadistisk cell i Nord-Italien.
Fyra tunisier och en marockan har
gripits och fler efterspanas.
Cellen har värvat islamister till jihad
i Afghanistan och Irak.
De nordafrikanska islamisterna har bl a
sysslat med försäkringsbedrägerier i
stor skala som använts till att finansiera
islamistisk verksamhet i Bosnien:
***
Police broke up a suspected terror cell Saturday
and arrested five North Africans, including the
alleged leader who Italian officials said recruited
Islamic extremists for attacks in Iraq and Afghanistan.
**
Authorities also suspect the cell sent tens of thousands
of euros (dollars) to groups in Bosnia that offer training
and logistical support to Iraqi and Afghan terror
organizations, said Claudio Galzerano, head of the
Italian police force's international terrorism division.
**
Police arrested the five suspects — four Tunisians and
one Moroccan — in Bologna and the nearby towns
of Faenza and Imola, Galzerano said. They were
accused of international terrorism, but have yet to
be formally charged, he said. A sixth suspect was
still being sought.
**
Galzerano said those arrested include alleged
Tunisian ringleader Khalil Jarraya, a veteran
of Bosnia's 1992-95 war, and four others he
allegedly recruited for suicide attacks in
Afghanistan and Iraq.
Galzerano said Jarraya, who also has received
Bosnian citizenship, may have recruited others
already sent abroad.
**
The arrests followed a three-year investigation
based on wiretaps and on training material found
in previous searches of the suspects' homes.
"In the telephone intercepts they always were
extremely satisfied when someone blew himself up,"
Galzerano told The Associated Press by telephone
from Bologna.
"These are people who were radicalized in the West
and declared themselves ready to become 'martyrs'
for jihad."
**
Galzerano said the cell sent tens of thousands of euros
(dollars) to Bosnian groups linked to terrorist
organizations in Iraq and Afghanistan. He said the
money came from the legitimate work of the group's
members as well as from insurance scams, for which
a charge of fraud was added to the arrest warrants.
**
The cell was not part of any specific terrorist organization,
but saw itself as close to al-Qaida, Galzerano said.
Investigators have long considered Italy a logistical
base where terror groups seek recruits and financing.
After the Sept. 11, 2001, attacks in the United States,
the country introduced the charge of international
terrorism, which can carry a sentence of up to 15 years jail.