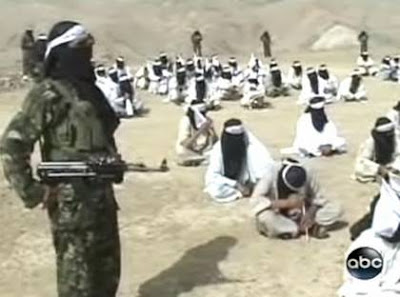 Not every recruit was given the same level of
training but, even so, thousands are estimated
to have passed through Al Qaida's camps.
Many of those trained by Al Qaida returned to
their home countries - including the UK - where
they joined existing terrorist networks or
established new, loosely-knit networks which
were often centred on a leading figure or "emir".
**
Most of the Al Qaida terrorist training camps in
Afghanistan were destroyed in the international
military action that followed the September 11,
2001 attacks in the United States.
However, terrorist training has continued elsewhere
in remote regions of Pakistan and Kashmir, though
this has sometimes consisted of little more than
groups of people meeting informally in places
where their activities would be difficult to detect.
**
Individuals who passed through Al Qaida's camps
have been involved in a variety of subsequent
terrorist attacks in Europe and elsewhere.
Although a significant number of Al Qaida's
"graduates" have been killed or arrested in the
worldwide campaign against terrorism, many
trained terrorists remain at large and continue
to pose a serious threat. They include a number
of UK citizens and foreign citizens resident in
the UK (see "Al Qaida and the UK").
**
In recent years, the Internet has become a key
means of indoctrinating and training would-be
terrorists. Extremist websites aim to recruit
and radicalise individuals through videos and
ideological statements. Such websites also
provide detailed advice and instructions on
how to plan and prepare for attacks, in effect
acting as a "virtual training camp".
A number of individuals in the UK and elsewhere
have been convicted for running or contributing
to extremist websites."