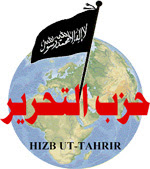 En pratglad imam som leder vår gamla
bekant Hizb ut-Tahrir i Australien har
berättat lite mer än rörelsen uppskattar:
***
"THE mysterious sheik behind the Australian chapter
of Islamist group Hizb ut-Tahrir has revealed the
organisation's support for military coups and
revolutions to overthrow non-Muslim governments
worldwide.
Ismail Al Wahwah, who was little known until last
month when he was banned from a Hizb ut-Tahrir
conference in Indonesia, spoke out on an Arabic radio
program that revealed him as the "active member"
of the group in Australia.
In an interview conducted in Arabic on SBS radio last
month, he attacked the West's lack of values and
backed the use of suicide bombings in Iraq and Palestine,
even if they killed Australians.
"I say any occupied people have the responsibility to
defend their country," he said in the interview,
which The Australian had translated into English.
"The victim ... should not be asked how he is
defending himself."
Sheik Wahwah is understood to be the unofficial leader
of Hizb ut-Tahrir in Australia."