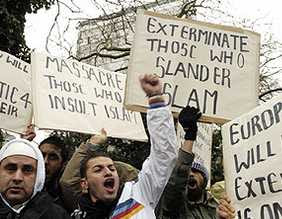 Walid Phares, en verklig kännare av islamistisk
terrorism (till skillnad från många av de figurer
som uppträder i svensk kvällspress) har analyserat
hoten mot Lars Vilks. Det får honom till att
formulera fyra frågor om Al Qaeda-hoten
och Sverige:
1. Why would al Qaeda Iraq and not another branch offer
such a bounty? The Cartoonist is Swedish and the al Qaeda
Iraq fights against the US in Iraq. Where is the link here?
Many voices in the debate on the War on Terror have been
saying that al Qaeda came to Iraq just because the US
invaded the country. What about Sweden?
*
2. Why is al Qaeda-Iraq offering a bounty for the killing
of an editor in Scandinavia? Why offering money for Jihad?
Well, when a Jihadi group begins to offer financial rewards,
it means that the ideological reward isn't enough.
*
3. Will such a call be heeded in Sweden? Does al Qaeda
have cells -dormant or not- that far north? Reports tells us
that the Salafists are propagating this ideology across Scandinavia.
Very few realized that an assassination of a film maker
in Amsterdam was imaginable before Theo Van Gogh was killed.
*
4. Will al Qaeda or other Jihadists attack Swedish companies or
individuals worldwide? In fact orders were given but it
depends on whom would consider themselves the "infantry" and
actually take action. It will also depend on what the Swedish
Government and Multinational Corporations would state in
public or do in private. Sweden has had decades of neutrality
regarding many challenges in international relations, and its
foreign policy wasn't comparable at all to NATO countries
in their struggle against Terror. However, this is the greatest
litmus test yet to be addressed.
*
Gudmundson har en bra kommentar
till hoten:
Vi får inte vika en tum.
Upplagd av hcp kl. 03:31