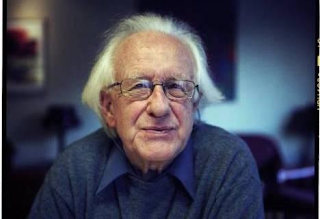 Den gamle norske kommunisten och
antisemiten Johan Galtung har
uteslutits ur den prestigefyllda
World Peace Academy.
Beslutet motiverades med hans allt
grövre antisemitiska uttalanden.
Enligt akademien har Galtung gjort
"reckless and offensive statements to questions
that are specifically sensitive for Jews."
**
Dr Manfred Gerstenfeld, framstående
expert på norsk antisemitism
kommenterade uteslutningen:
"Orwell wrote in 1942 that pacifism was
objectively pro-fascist, because of its
hampering the war efforts of the allies.
The 'peace scholar' Galtung uses a different
method to help Israel's totalitarian and
murderous enemies.
Without any proof he associates the Mossad
to the Norwegian mass murderer Breivik,
he falsely suggests that The Protocols of the
Elders of Zion are genuine and so on.
His attitude fits that of significant parts of
the Norwegian cultural elite.
Galtung has merited his place in text-
books of 21st century anti-Semitism."
The Humanist magazine printed Galtung's
remarks. Galtung wrote in one of the ex-
changes that Jews control the American
media.
"Six Jewish companies control 96% of the
media," he wrote, including the names of
journalists, publishers, TV networks and
movie studios that he claims are controlled
by Jews.
He also wrote that "70% of the
professors at the 20 most-important
American universities are Jewish."
Galtung recommended that people read
the anti-Semitic screed The Protocols of
the Elders of Zion and said, "It is impossible
to do so today without thinking of Goldman
Sachs," the international investment bank.
Upplagd av hcp kl. 21:00