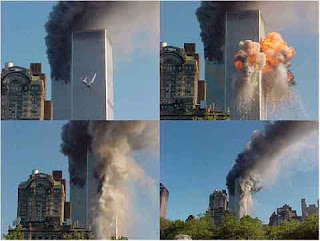 Vi har tidigare kommenterat det van-
vettiga projektet att bygga en stor-
moské 200 meter från platsen för
Ground Zero där 3.500 människor
dödades i World Trade Center
11 september 2001.
Tyvärr tycks kommunen fullständigt
ointresserade av att stoppa bygget.
Bygglovet är beviljat. Finansieringen
ordnad och presidentens välvilja strålar
över projektet.
Den islamistiska moskéen är det största
hånet mot WTC-offren och deras
anhöriga som någon sjuk hjärna
kunde tänka ut....
***
Arutz Sheva ger en lägesrapport:
A “last-chance” public hearing to block the proposed
13-story $100 million mosque planned near Ground
Zero, the site of the 9/11 attack on New York Tuesday
puts Mayor Bloomberg on the defense. He has rejected
opponents’ demands that the backers of the plan be
investigated for possible links with terrorists or terrorist
groups.
**
New York City officials already have approved
the project, and the only hope by opponents to
block its construction is to convince the Landmark
Preservation Commission to prevent the demolition
of the 152-year-old Cordova House warehouse in
order to make way for a mammoth Muslim
community center and house of worship.
**
Opposition groups from a wide spectrum of the
population—ranging from Jews to Sikhs—staged
a large demonstration in early June against
the planned mosque.
The Park Place site is 600 feet from the area
where Muslim suicide terrorists hijacked two
planes and aimed them at the two towering
Twin Towers in the early morning, when the
planes’ fuel tanks were full.
**
The resulting explosion and intense fire
melted the metal structures, toppling the
towers and killing nearly 3,500 people,
including police officers and firefighters
who arrived to control the blaze and
cordon off the area. One of the engines
of the hijacked planes crashed into the
Cordova House roof, causing severe
damage.
**
Mayor Bloomberg has taken heat for not
conducting a probe into the backers of
the mosque project, while Republican
gubernatorial hopeful Rick Lazio last
week called on Attorney General Andrew
Cuomo, his Democratic opponent, to
conduct a probe. Lazio questioned the
sympathies of the center’s backers, and
said that “the people have a right to know
if this ‘charity’ is using its resources in a
legitimate, legal, and charitable way.”
**
Robert Spencer, director of Jihad Watch,
has charged that “the imam behind [the]
proposed mosque near Ground Zero is a
prominent member of a group that helped
sponsor the pro-Palestinian activists who
clashed violently with Israeli commandos
at sea.
"Imam Feisal Abdul Rauf is a key figure in
Malaysian-based Perdana Global Peace
Organization, according to its website.
Perdana is the single biggest donor ($366,000)
so far to the Free Gaza Movement, a key
organizer of the six-ship flotilla that tried to
break Israel's blockade of Hamas-run Gaza"
May 31.
**
“It’s just two blocks away. They will pass it on
the way to the memorial,”
Roman Gertsberg, a Queens resident who
lost his only daughter Marina in the terrorist
attack told am/NY.
**

Building a mosque just several blocks away
from Ground Zero is an insult and an affront
to every single person that was killed on
9/11, to their families, to the first responders
and every concerned American who cherishes
liberty, democracy and freedom,”
Pamela Geller, executive director of 'Stop the
Islamization of America',” said at last month’s
protest.
**
Tuesday’s hearings, which are expected to be
hotly contested, are expected to last for two
hours, but a decision will not be announced
until later this summer.(IsraelNationalNews.com)
Upplagd av hcp kl. 11:30