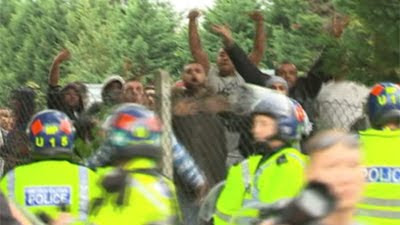 Note that the SIOE demonstration didn't even take place. The people who were responsible for the violence were the Muslim counter-demonstrators. There is an awful lot of passive voice in this egregious BBC story, but what happened is still more or less clear. The mainstream media only generally breaks out the passive voice in large quantities when it doesn't want to identify the perpetrators -- after all, one wouldn't want to appear "Islamophobic," eh wot?

"Eight arrested in mosque protest," from the BBC, September 11 (thanks to all who sent this in):

Eight people have been arrested during a demonstration outside a mosque in north-west London where an anti-Islamic protest was planned. About 1,000 people gathered outside Harrow Central Mosque as activists from Stop Islamification of Europe planned to demonstrate outside the mosque.Unite Against Fascism were also present to "defend the mosque", they said.

So it's "fascist" to oppose the spread of an ideology that would extinguish free speech, freedom of conscience, and the equality of rights of women with men and of people of all creeds? Tell me another.

Bricks, bottles and firecrackers were thrown at police officers who are present in riot gear at the scene.

These were thrown by the Muslims. Pamela has photos.

Just after 2000 BST, police said there were a small number of people in the area. Mobile patrols are continuing in a bid to reassure residents. Earlier, hundreds of youths, some covering their faces with scarves, were in the area and there were skirmishes with police as some demonstrators broke a police cordon.

Stop Islamification of Europe (SIOE) said they planned a "peaceful protest" against the building of a five-storey mosque next to the Harrow Central Mosque.But in a message on their website SIOE said the protest had been called off and organiser Stephen Gash had been arrested.The posting read: "If you are on your way to the demo, don't go, it's being called off right now.

"The police can't handle the Muslim counter-demonstrators. The senior sergeant said that he doesn't want any of his policemen killed."Seven people were arrested for possession of offensive weapons including a hammer, a chisel and bottles of bleach.Police believe these arrests were not linked to the SIOE protest.