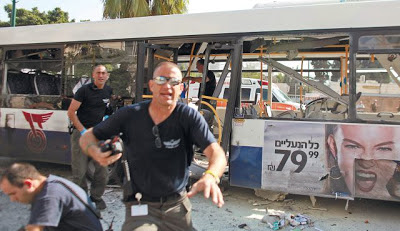 Säkerhetstjänsten Shin Bet började
gripa bussbombarna i Tel Aviv bara
några timmar efter terrordådet.
Det handlar om en Hamascell från
Beit Lakiya i Samarien. Bomben
placerades av en arab med israeliskt'
ID-kort.
**
The cell's members, who are identified
with Hamas and Islamic Jihad, admitted
in their initial questioning in the Shin
Bet that they had agreed upon a plan
to carry out a terror attack, then pre-
pared the explosive device, chose Tel
Aviv as their target, and purchased a
cellular phone in order to use it to
detonate the device.
They also enlisted an Arab with Israeli
citizenship, who is originally from Beit
Lakiya but married an Israeli Arab.
They used a car belonging to the man's
employer in order to transport the device
into Tel Aviv. The employer, an Arab from
eastern Jerusalem, was unaware of their
plan.
The Israeli citizen placed the explosive
charge on the bus, and then informed
his commander in Beit Lakiya, who
dialed the phone and detonated the
device.
The investigation is ongoing and
additional arrests are expected.
***
Arutz Sheva
Upplagd av hcp kl. 23:00