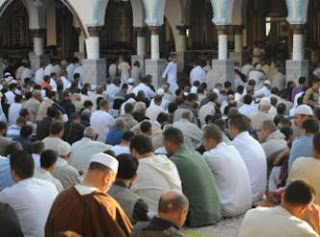 De algeriska myndigheterna stängde
förra veckan över niohundra (!) moskéer
som använts som mötesplatser av
islamistiska terrorgrupper, skriver
italienska ADN-Kronos, som citerar
tidningen El-Khabar.
**
Authorities say they Al-Qaeda in the Islamic
Maghreb (AQIM) was particularly active in
the places of worship where meetings
among militants took place in secret, the
report said.
The prayer halls were opened illegally,
El-Khabar said, ignoring laws requiring
approval by the Ministry of Religious Affairs
before they can be opened.
AQIM grew out of the Salafist Group for
Call and Combat (GSPC), and has its roots
in an Islamist militia involved in the civil war
in the 1990s that cost between 150,000
and 200,000 lives.
In recent years it has expanded its activities
to include Mali, Niger and Mauritania and is
considered by experts to be the most
active Al-Qaeda offshoot.
Upplagd av hcp kl. 12:00