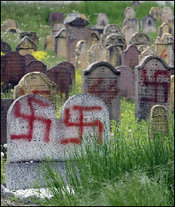 Australien uppfattar vi kanske inte
som något centrum för judehat, men
likväl har antalet antisemitiska incidenter
där ökat med 31 % i år, rapporterar Your
Jewish News.
**
JEWS in Australia faced 517 incidents of
harassment or intimidation in the year to
September 30, a 31 per cent rise from the
year before, according to the Jewish community's
annual report on anti-Semitism.
"Put bluntly, in Australia this year, 10 times a
week, every week, Jewish Australians were
attacked or threatened," report author Jeremy
Jones said yesterday.
It is the 22nd year that Mr Jones, community
affairs director for the Australia/Israel & Jewish
Affairs Council, has produced the report, which
showed a 38 per cent increase over the average
of the previous 21 years but an 80 per cent drop
on the record tally (2009).
**
Between October 1, 2010, and September 30 this
year, there were 17 physical assaults or property
damage, 128 incidents of direct harassment and
intimidation, five threatening phone calls, 301
emails, 48 incidents of anti-Jewish graffiti, and 18
other incidents.
**
Mr Jones said the total did not include anti-Israel
incidents or those where motivation was in doubt.
While anti-Jewish violence had little public support,
anti-Semitic comments "find comfortable hosts on
the online sites of mainstream media outlets,
including government-owned", he said.
He said Australians needed to treat hate crimes
seriously. The property damage or injury might
be slight, but the impact on the victim and the
community might be significant.
**
The media should not allow comments online
that they would not print or broadcast.
"It is time mainstream media and others grew up.
The online world can no longer be regarded as
some sort of alternative reality," Mr Jones said.
"Just as most church groups have managed to
psychologically distance themselves from pseudo-
Christian racists, mainstream Muslims, leftists,
rightists and others need to identify racists as just
that — bigots undeserving of a place."
Upplagd av hcp kl. 07:00