Allah Is a Zionist 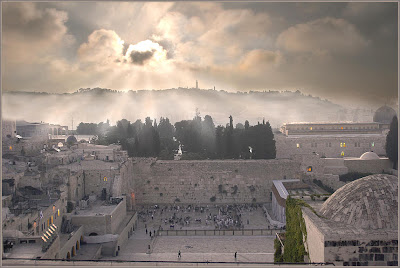 Den italienske imamen Sheikh Abdul Hadi Palazzi
analyserar vad Koranen egentligen säger om
judarnas rätt till Det Heliga Landet.
Imamen besökte nyligen Israel, där han väckte
viss sensation genom att besöka den judiska
staden Hebron i Judéen för att stödja de
belägrade judarna...
***
The Quranic argument for Jewish sovereignty
in the land of Israel
One can easily verify that Jewish and Muslim traditional
sources are confirming each other: The Temple was built
by Solomon and destroyed by a Babylonian king.
A Persian king later defeated the Babylonians and
ransomed the Jews, permitting them to return to
the Land of Israel. The Temple was rebuilt but
afterward was destroyed by the Romans.
This Temple stood in the area referred to as Beth
haMikdash in Hebrew and Bayt al-Maqdis in Arabic.
Those political and pseudo-religious Palestinian leaders
who claim that “there was never a Jewish Temple in
Jerusalem” are surely aware that, in order to support
their political claims, they are compelled to lie, hide
sources, and contradict the letter of the Quran and
the Islamic tradition.
**
An earlier Quranic exegete and jurist, Imam
Muhammad ibn Jarir at-Tabari, who lived from 838
to 923, writes in his Tarikh al-Rusul wa al-Muluk,
or History of Prophets and Kings, that the same
sacred area was the place where Jacob had his
vision of the Heavenly Ladder:
When Jacob awoke he felt blissful from what he had
seen in his trustful dream and vowed, for God’s sake
that, if he returned to his family safely, he would
build there a Temple for the Almighty. He also
vowed to perpetual charity one tenth of his property
for the sake of God. He poured oil on the Stone so as
to recognize it and called the place Bayt El, which
means ‘the House of God.’
It became the location of Jerusalem later.
**
In Jerusalem on a huge Rock, Solomon son of David
built a beautiful Temple to expand the worship of
God. Today on the base of that Temple stands the
Dome of the Rock.
Historical negation of Jewish and Islamic sources
concerning Jerusalem is recent and does not predate
the PLO and its political propaganda.
In 1932, during the British Mandate period, the Supreme
Muslim Council of Jerusalem published a Brief Guide
to Haram as-Sharif for Muslim pilgrims, written in
English.
“This site is one of the oldest in the world,” it says.
“Its sanctity dates from the earliest times. Its identity
with the site of Solomon’s Temple is beyond dispute.
This, too, is the spot, according to universal belief, on
which David built there an altar unto the Lord, and
offered burnt offerings and peace offerings.”
**
Not only were Arafat’s minions and heirs in Jerusalem
attempting to rewrite the history of Arabs and Jews
in the region as told by others; they were also
attempting to rewrite the history of Arabs and Jews
in the region as told by Islamic Arab sources, too.
***
Läs hela imamens artikel
Upplagd av hcp kl. 06:00