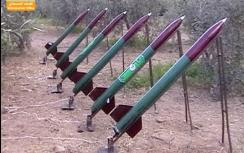 Intelligence News berättar:
**
Italian authorities have announced the arrest
of two Iranians and five Italians on suspicion
of smuggling European-made weapons and
explosives to Iran. Italian police said the
Iranians involved in the operation, which
breached an international embargo on Iran, are
“believed to be members of the Iranian secret
services”. They are Ali Damirchiloo, 55
(occupation unknown), and Hamid Nejad
Masoumi, 51, an accredited journalist and
Iranian state television correspondent, who has
lived in Italy since 1995. Italian authorities have
issued arrest warrants for two more Iranians,
Hamir Bakhtiyari Reza and Bakhtiyari
Homayoun, who are also believed to be
intelligence agents and are thought to have
managed to escape to Iran. Weapons and
explosives seized by police include mostly dual-
use gear (civilian equipment with military
applications), such as chemical explosives, optical
equipment, and even scuba-diving paraphernalia.
But they also include Bulgarian-made anti-tank
missiles, and incendiary bomb parts, most of which
had been purchased in Eastern Europe and
trafficked through front companies in the Czech
Republic, Britain, Italy, and the United Arab Emirates.
The police operation, code-named SNIPER, which led
to the seven arrests, appears to have been multinational,
with Italian, Swiss, British and Romanian law enforcement
authorities chipping in.
In the meantime, Tehran has rejected the Italian arms-
smuggling allegations, and has summoned the Italian
ambassador.
Upplagd av hcp kl. 20:00