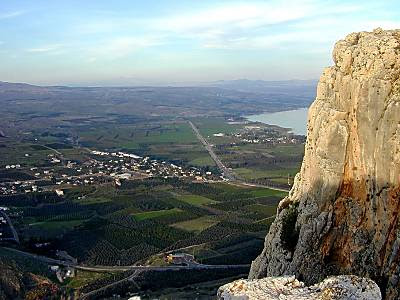 Moshav Tzipori, in the Lower Galilee, is a microcosm of the history of the Land of Israel. A regional capital under King Herod, Tzipori was the seat of Jewish learning and the preservation of the Torah through some of the most tumultuous periods of Jewish history.

After the Romans destroyed the Second Temple in Jerusalem in 70 CE, refugees from Jerusalem fled to the Galilean town. Rabbi Yehuda Hanassi, who presided over the writing of the Mishna, or oral law, moved to Tzipori from Beit Shearim, and it was there that he codified the six books of the Mishna and died.

The Jews of Tzipori revolted against the Roman Emperor Constantine, refusing to accept Christianity and the city was destroyed. The Jews later returned during the Islamic period. On and off, for the next millennia, Jews settled, were forcibly removed and resettled the city several times under various conquerors of Israel.

During the 1948 War of Independence, the ancient city was the site of a major battle between the new Israel Defense Force and the neighboring Arab villages assisted by invading forces from Syria and Lebanon. The Arabs were routed. In 1949, Moshav Tzipori was founded.

LAST FRIDAY afternoon, the struggle for Jewish control of Tzipori, the Galilee and the Land of Israel as a whole continued on the ancient ground. On that quiet afternoon of Purim, under the blistering sun, three horses stood happily grazing in a field of shrubs and grasses. The only problem with the otherwise pastoral scene was that the horses belong to Arab squatters from the Kablawi clan. In recent years, the Kablawis have built themselves an illegal village of some 20 houses masquerading as storage containers on stolen Jewish National Fund land adjacent to Tzipori's fields. The horses, who entered through a hole cut into the field's fence, pranced about and ate, destroying the field that was painstakingly cultivated for the moshav's cattle herds.

The farmers and ranchers of the Galilee, like their counterparts in the Negev are at wits' end. Fearing Arab riots or political condemnation by the Israeli Left, Arab leaders, the Islamic Movement and their allies abroad, the police and the state prosecutors have simply stopped enforcing the laws against the Galilee and Negev Arabs. Surrounded by increasingly hostile and lawless Arab and Beduin villages, local Jews' livestock and crops are continuously plundered.

They are faced with three equally unacceptable options for contending with this state of affairs. They can do nothing and let their livelihood and lives' work be destroyed. They can pay protection money to Arab criminal gangs, who in exchange agree not to rob them. Or they can try to sell off their lands and abandon agriculture altogether.

The obvious recourse - filing a complaint with the police - is an exercise in futility. Thousands of complaints are filed each year. Almost none of them end in indictments or trials. Most of the files are closed by the police due to "lack of public interest."

ON FRIDAY, the field in question belonged to a cattle rancher named Haim Z. Over the past few years, Haim has filed more than 250 complaints against local Arabs from the Kablawi family and from neighboring Arab villages like the Islamist stronghold Mashad with the police. None have ever gone anywhere. Last year, a helpful police officer recommended that Haim simply start paying protection money.

Last year Haim told his son that he had had it. The son of the moshav's founding generation, Haim said that he just couldn't go on anymore. The state's refusal to protect Jewish property rights had forced him to devote all of his energies to playing cat and mouse games with Arab poachers. He couldn't invest in his herd. He couldn't develop his land. All he could do was sit by and watch as year in and year out, his lands were plundered, his cattle stolen and the work of his life and his father's life was destroyed.

HIS SON, a 23 year old soldier in one of the IDF's elite commando units decided that it was up to him not only to save his father's farm, but to stem the tide of Arab infringement on Jewish land and property rights. Due to his position in the IDF, his name is classified. We'll call him J - for Jew.

In response to his father's desperation, J. took a storage container to a hilltop that overlooks Tzipori's fields, the surrounding Arab villages and the access routes to the moshav's fields. He placed a sofa, a bookshelf full of Jewish history books, religious texts and philosophy classics, and canned food inside and moved in during his furloughs from the army. Rather than hang out with his friends, he began standing guard. He confronted every Arab he caught infiltrating the moshav's fields, and both filed complaints with the police and chased them away.

Given his impossible schedule, J. enlisted his friends to help out. The sons of other desperate farmers, who also serve in combat units, they joined him enthusiastically. Within months, J. had set up an organization of more than a hundred young volunteers - soldiers, college students, and high school students from his moshav, other moshavim in the lower Galilee and surrounding non-agricultural communities.

He called the organization, Hashomer Hayisraeli Hahadash - or the New Israeli Guardsmen. The original Hashomer, or Guardsmen was established in the Galilee in 1909 for the same purpose - protecting Jewish farming communities from Arab marauders who demanded protection money from the farmers. It was the progenitor of the Haganah, which in turn, became the Israel Defense Force.

As J. puts it, "We're not simply a security service. We see ourselves as a new movement. Our activities rest on three foundations: securing the land, expanding our operations throughout the Galilee and the Negev, and teaching Zionist and Jewish values to our members, our communities and the general public."

TZIPORI, ONE of the stops of the Cross Israel Hiking Trail, is a popular destination for school groups, youth groups and just regular hikers. J. has organized visits to his guard post for thousands of hikers over the past year. During their visits the hikers listen to lectures about the New Guardsmen, about the Jewish history of the Galilee and the development of agriculture in the area, and topics of general interest provided by local residents, politicians and professors.

Friday afternoon, after noticing another encroachment on his father's field, J. called the police at the Nazareth police station. Joined by two of his fellow guardsmen, who are also sons of farmers and soldiers in commando units, they waited in the sun for over an hour for the police to arrive and planned their moves. They approached the horses with reins and bits.

"We will seize the horses and bring them back to our stable. If the Kablawis pay the damages, then I'll give them back, if not, I'll sell them," J. explained.

As the young men approached the horses, Yasser Kablawi, the head of the clan appeared. According to Haim, over the past year, the Kablawis have trampled his fields with their animals on more than 20 occasions.

Haim, who arrived at the scene some 10 minutes before the police made their grand appearance turned toward Kablawi and said, "Why are you doing this?"

"This land belongs to the JNF, not to you," Kablawi said.

"Why are you lying? I sat in your home with the JNF inspector months ago, and he told you straight that this is my land. You know you are stealing from me, and you're doing it while you're illegally squatting on JNF land. You've caused me tens of thousands of shekels in damages by trampling my fields today alone, and you know it."

By the time the police arrived, J. and his friends had roped one of the horses. Kablawi was joined by three grandsons and four sons. J. was joined by another seven Guardsmen. It was a standoff.

THE POLICE, who were informed of the presence of a journalist at the scene, acted with some resolution. After speaking with the JNF inspector, they explained to Kablawi that he could either sign a statement acknowledging that the land belongs to Haim and that he would be arrested if he trespassed again, or they would allow Haim to seize his horses. Kablawi signed.

J.'s activism is not just a personal quest to save his father from economic ruin. "If it were just about me and my family, my brother and I could take care of the thieves. They'd leave us alone. But then they'd just move on to our neighbors. It isn't about one family. This is a question of control over the land of Israel. The state is weak. We need to be strong if we want to remain here."

Last month, J. registered the Guardsman as a non-profit organization. He has a grand vision for the future.

"In the space of just a few months, I have brought in thousands of people, exposed them to our mission. I have more than a 100 volunteer guards. We have reduced theft by 80 percent.

"I want to raise money to buy night vision goggles and some all terrain vehicles to do proper patrols. I'd like to be able to give students scholarships so that they can guard and study at the same time. I've been in touch with farmers and ranchers in the Negev and they are anxious for us to expand to the south. I believe that within five years, the Guardsmen can end the protection rackets."

Young people like J. and his colleagues, secular, yet deeply rooted Jewish sons and daughters of Galilee and Negev farmers, like their religious friends prove everyday that Olmert was not speaking for his countrymen. Whatever messes Olmert and his colleagues in the government still manage to make before they are finally thrown from office, it is absolutely clear that these young people and millions like them are willing and able to clean them up for themselves, their countrymen, and for the next generation of Jews in the land of Israel.