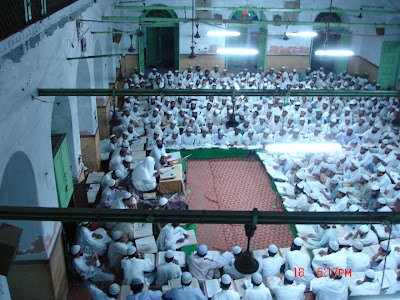 Den extrema Deobandi-sekten har
idag fått ett dominerande inflytande
över islam i Storbritannien och håller
på att bygga världens största moské
i London. Även på närmare håll,
i Norge, har vi idag ett starkt
Dedobandi-inflytande över den
pakistanska gruppen.
**
Därför väckte det visst uppseende
när rörelsens centrum, högskolan
i Deoband, förklarade att de tog
avstånd från terrorism.....
**
Nu har den indiska journalisten
Tavleen Singh tittat närmare på
Deoband och "avståndstagandet":
"The scariest religious institution
I have ever been to is the Darul Uloom
in Deoband. In the hour I spent
wandering about its grounds on my
single uninvited visit a couple of years ago
I understood why it had inspired the Taliban.
It is an institution that remains frozen
in seventh century Arabia, a time when
men were primitive and women got a
primitive deal. I saw one woman while I
was there and she was veiled to the eyeballs.
**
The angry young students I met were
Islamists to a man and the maleficent
power of Saudi Arabia manifested itself
in their refusal to speak to me because they
were only allowed to speak Arabic.
So they said. This most important Islamic
seminary on the Indian sub-continent
may not be directly training jihadis but it is
responsible for perpetuating a narrow,
literal interpretation of Islam
which is the ideology that inspires
the jihad.
**
Last week, when I heard the Darul Uloom
had condemned terrorism, I went
disbelievingly to their website to download
a copy of the declaration made at the
end of the conference of bearded mullahs.
This is what I found.
After declaring untruly that Islam
treats all mankind with equality
(there should be no infidels then)
the declaration says, ‘Islam sternly
condemns all kinds of oppression,
violence and terrorism’.
**
So far so good, but the next
paragraph and the one after
clarifies that the Darul Uloom’s idea
of terrorism is different to yours and mine.
It’s not attacks by Islamist suicide
bombers on us idol-worshippers
that they are worried about but
attacks on Muslims. Listen.
‘The Conference expresses its deep
concern and agony on the present
global and national alarming conditions
(sic) in which most of the nations are
adopting such an attitude against their
citizens, especially Muslims, to appease
the tyrant and colonial master of the
West . . . the conference strongly demands
the Indian Government (sic) to
curb those maligning the
madrassas and Muslims’.
**
As I suspected, nothing has changed
in the cloistered world of the Darul Uloom.
If it had the declaration should have
contained at least one reference to
innocent infidels being killed by Islamist
suicide bombers as they prayed in temples
and went home from work on
Mumbai’s commuter trains. "
Indian Express
Upplagd av hcp kl. 12:54