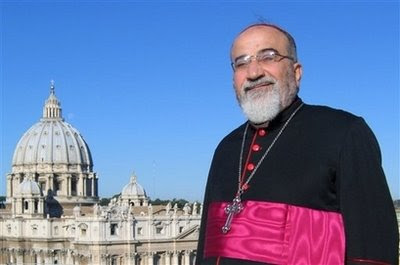 Den kaldeisk-katolske ärkebiskopen
av Mosul, Paulos Faraj Rahho,
som kidnappades för några
veckor sedan har nu hittats
mördad. Mordet skedde i ett
område som behärskas av
Al Qaeda-allierade sunnigrupper.
**
The body of Paulos Faraj Rahho,
the archbishop of Mosul,
was found near the northern city,
the Church said, quoting the auxiliary
archbishop of Baghdad, Shlemon Warduni.
"We recovered his body near Mosul,"
Warduni said, according to the Church's
news agency SIR.
"The kidnappers had buried him."
Rahho was kidnapped on February 29
in Mosul after a deadly shootout in
which three of his companions were killed.
Iraqi forces in Mosul had fanned out
to search for Rahho, whose abduction
was branded as "atrocious" by Pope Benedict XVI.
**
Rahho was the latest in a long
line of Chaldean clerics to be abducted
in Iraq since the US-led invasion in
March 2003. Two priests were kidnapped
in the city in October, and last June
a priest and three deacons were
attacked in front of their church.
**
Iraq's Christians, with the Chaldean
sect by far the largest community,
were said to number as many as
800,000 before the 2003 invasion.
Associated with the "Crusader"
invaders and regarded as well-off,
they are now victims of sectarian
cleansing, killings and kidnappings at
the hands of both Sunni and
Shiite Islamists, as well as
criminal gangs.
(Yahoo News)
Upplagd av hcp kl. 20:16