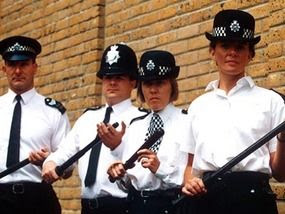 Four police officers in Britain's top force
are reportedly under close secret service
surveillance after being identified as
Al Qaeda spies, it emerged today.
MI5 are said to have homed in on the the
"sleeper" agents passing secrets from
Scotland Yard to the terror group only
in recent weeks.
**
The suspected spies are believed to have
used methods similar to those employed by
the IRA in the 1970s as they infiltrated the police
and the Army in Northern Ireland.
Police began searching for spies after
July 7 attacks
**
All four are understood to be Asians living in
London and are feared to have links
both with Islamic extremists in Britain and
worldwide terror groups - including Al Qaeda
training camps in Pakistan and Afghanistan.
**
MI5 chiefs reportedly believe the
suspected moles have been planted as sleepers
- agents under deep cover - to keep Al Qaeda
informed of anti-terror raids planned
by London's Metropolitan Police.
They are said to fear the four
could have already accessed sensitive information
about secret operations to root out terror
cells planning further attacks in the UK.
Upplagd av hcp kl. 08:00