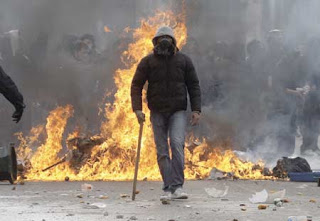 Barry Rubin skrev nyligen i sin analys av
inbördeskriget i Syrien:
No, this is a war to the death. The regime
cannot make a deal and yield power because
the elite would lose everything it has.
Moreover, the government elite would face death,
exile, or long-term imprisonment if it loses.
Similarly, the dominant Alawite community
and large portions of the Christian one
(together roughly 25 percent of the population)
risks massacre if the government falls.
** 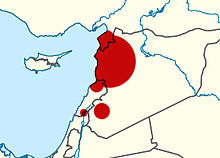 Som en bekräftelse på detta rapporterar Debka File
att Assadklanens alawiter börjar dra sig mot bergs-
massiven i nordvästra Syrien, de s k Alawitiska Bergen.
En seger för Muslimska Brödraskapet betyder under-
gång för landets minoriteter:
This is the only densely forested region along Syria’s
Mediterranean coast. From there, the Assads will
continue to fight for their survival.
The Al-Ansariyyah range averages 32 kilometers (20 miles)
in breadth and a peak elevation of just over 1,200 meters.
The tallest mountain, Nabi Yunis east of Latakia, is 1,562
meters (5,125 feet) high. The range slopes down from
its northern tip to an average altitude of 900 meters
(3,000 feet) and 600 meters in the south.
Our military and intelligence sources have discovered the
Syrian engineering corps working in the forested areas
of those mountains on the construction of a fortified
encampment, partly inside caves and tunnels.
They are enclosing its perimeter with anti-tank defenses
armed with anti-air batteries.
When finished, the camp will be one of the most heavily
fortified strongholds in the Middle East.
In support of the Syrian dictator, large groups of Alawite
families began moving in the last week of November from
the plains around Latakia, Hama and Homs to new homes
in the encampment – apparently on a signal from Assad’s
intelligence and security services.
The Alawites who cannot leave their towns or villages for
some reason are being moved into fortified precincts close
to their homes.
***
Upplagd av hcp kl. 11:30