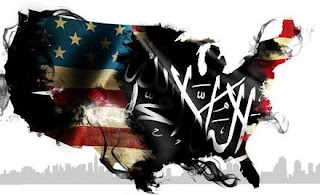 Ett globalt salafistiskt nätverk som
använder sig av sharia för Väster-
landets islamisering. Det beskrivs i en
ny MEMRI-rapport:
Over recent years, a new phenomenon
has emerged among radical Islamist circles:
the rise of a global network of groups calling
for the total Islamization of Western states
and societies via the implementation of shari'a
law, the abolishment of democratic states and
their replacement by Islamic regimes.
**
These groups, which have referred to themselves
as the global shari'a movement, strive to globalize
ideas and tactics hatched within radical Salafi
circles in the These circles are led by Sheikh
Omar Bakri, who was denied reentry into the country
after he left for following the 2005
bombings, and his disciple Anjem Choudary, who
founded several groups in the country that have since
been banned by the British authorities.
**
Choudary has significant influence and involvement
in most, if not all, of the groups which are part of the
so-called global shari'a movement, whether directly
or in inspiration, moral support or guidance.
His name regularly appears on their websites, You
Tube clips, and Facebook pages. For instance, the
contact page on the Shariah4usa website provides
contact information for Choudary, as well as for Bakri
and for Ibrahim Siddiq Conlon, the head of
Sharia4australia who recently posted a letter of
support for Choudary on his Facebook page.
**
Such groups have adopted Bakri and Choudary's
worldview and modus operandi in openly calling
for and demonstrating in favor of the establishment
of Islamic rule, while opposing democracy as a
political ideal and system, condemning freedom,
and protesting the West's alleged crimes against
Muslims. However, despite the image they have
attempted to create, and despite meriting some
media attention in the countries where they operate,
the groups lack a substantial presence on the ground,
with the exception of the U.K.-based groups, whose
relatively high numbers and effective organization
enable them to be more active – and, as a result, to
enjoy considerably larger publicity in the media.
The most tangible presence of these groups, especially
those outside the , is on online social networks,
namely YouTube and Facebook.
***
Läs hela rapporten
Upplagd av hcp kl. 12:00