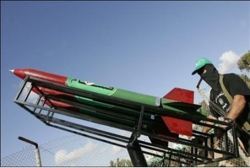 Ännu en gång har Hamas brutit en vapenvila
och börjat bombardera Israel.
Den israeliske professorn David Badein är inte
överraskad. I en intervju med Arutz Sheva för-
klarar han att själva begreppet "vapenvila" inte
existerar på arabiska...
**
Hamas använder begreppen "hudna" eller
"tahadiya", som inte alls betyder att
beskjutningen med granater och raketer
stoppas.
Bedein förklarar att enligt islamisk lag
betyder begreppen att det är upp till
den enskilde att slåss eller sluta
slåss....
“They can attack and stop attacking
whenever they want,” he said.
“There is no connection between hudna
and tahadiya and a ceasefire.
You have to understand the terms.”
**
Bedein’s Center for Near East Policy has
studied these terms carefully using four
Middle East experts. He reminded what
happened after three previous ‘ceasefires’
that were declared by Hamas:
After the ceasefire announced in 2006 235
missiles and rockets were into Israeli territory;
after the ceasefire announced in 2008 and
which lasted six months, 538 missiles and
rockets were fired; after the third ceasefire,
which was signed after the IDF’s Operation
Cast Lead in Gaza, no less than 912 missiles
and rockets were fired into Israeli territory.
**
Bedein emphasized that the Israeli public must
understand the differences in the terms and
added that when Israelis hear the media
mention a ceasefire they should point out
the error to the media outlets and say that
it is not a ceasefire but a hudna or a tahadiya.
He also recommended that similar protest calls
also be made to the President’s Residence,
which he said helps spreads the ceasefire lie.
**
He added that the Prime Minister and the Foreign
Ministry are not free from blame either, since
they know what the terms mean and still do
not explain them to the public.
The reason for that, believes Bedein, is that
“there are elements in the Prime Minister’s Office
and the Foreign Ministry who do not want to
deal with a situation of total war with the
Palestinian Authority.”
**
Meanwhile, ceasefire or not, southern Israeli
cities came under rocket fire again for a
fifth night on Monday.
Residents in Ashkelon found themselves racing
for cover several times throughout the night
Monday as the Color Red air raid siren blared
its warning, starting in the early evening.
Upplagd av hcp kl. 09:00