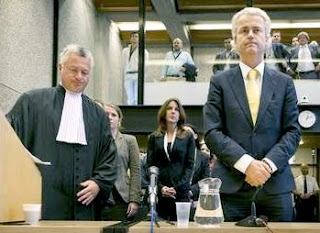 The lights are going out all over .

All over the continent where our culture

flourished and where man created freedom,

prosperity and civilization. The foundation

of the West is under attack everywhere.
**
All over the elites are acting as the

protectors of an ideology that has been bent

on destroying us for fourteen centuries.

An ideology that has sprung from the desert

and that can produce only deserts because it

does not give people freedom. The Islamic

author], the Islamic Bill Gates; they do not

exist because without freedom there is no

creativity. The ideology of Islam is especially

noted for killing and oppression and can only

produce societies that are backward and im-

poverished. Surprisingly, the elites do not

want to hear any criticism of this ideology.
**
My trial is not an isolated incident. Only fools

believe it is. All over multicultural

elites are waging total war against their

populations. Their goal is to continue the

strategy of mass immigration, which will

ultimately result in an Islamic Europe —

a without freedom: Eurabia.
**
The lights are going out all over .

Anyone who thinks or speaks individually

is at risk. Freedom-loving citizens who

criticize Islam, or even merely suggest

that there is a relationship between Islam

and crime or honour killing, must suffer,

and are threatened or criminalized.

Those who speak the truth are in danger.

The lights are going out all over .

are at work, on the lookout for thought

back within the confines where it is allowed

to think.
**
This trial is not about me. It is about some-

thing much greater. Freedom of speech is

not the property of those who happen to

belong to the elites of a country. It is an

inalienable right, the birthright of our people.

For centuries battles have been fought for

it, and now it is being sacrificed to please

a totalitarian ideology.
**
Future generations will look back at this

trial and wonder who was right. Who

defended freedom and who wanted to get

Our freedom is being restricted everywhere,

so I repeat what I said here last year:
It is not only the privilege, but also the

duty of free people — and hence also my

duty as a member of the Dutch Parliament -

to speak out against any ideology that

threatens freedom. Hence it is a right

and a duty to speak the truth about the

evil ideology that is called Islam. I hope

that freedom of speech will emerge

triumphant from this trial. I hope not only

that I shall be acquitted, but especially

that freedom of speech will continue

to exist in the and in .