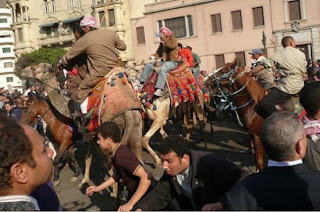 be based on a perception that the rise of

the Muslim Brotherhood would be extremely

dangerous? Or have they taken the position

establishment - that the Brotherhood has

become moderate and can be talked to?

it does not rule out Muslim Brotherhood

participation in a future Egyptian coalition

Since January 28, the Muslim Brotherhood's

with its support of Mohamed ElBaradei to

lead the opposition forces against the government.

In the streets of , Muslim Brotherhood

ElBaradei "donkeys of the revolution"

to be used and then pushed away - a scenario

that sees the Muslim Brotherhood exploit

ElBaradei in order to hijack the Egyptian

revolution at a later stage.

There has been a great deal of confusion about

the Muslim Brotherhood. In the years after it was

founded in 1928, it developed a "secret apparatus"

that engaged in political terrorism against Egyptian

Copts as well as government officials. In December

It also sought to kill Egyptian leader Abdel Nasser in

Muhammad Akef declared in 2004 his "complete

faith that Islam will invade Europe and ."

In 2001, the Muslim Brotherhood's publication in

, Risalat al-Ikhwan, featured at the top of its

cover page the slogan: "Our : World

Domination." This header was changed after 9/11.

a sermon in September 2010 stating that "the

improvement and change that the [Muslim]

nation seeks can only be attained through jihad

and sacrifice and by raising a jihadi generation