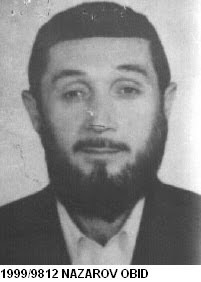 Uzbek state television has accused a

cleric based in of masterminding

as well as a 2004 suicide bombing at the

A documentary that aired Thursday night

preacher in who fled to neigh-

flown to with the help of "foreign

"Although Nazarov was wanted by Uzbek

law enforcement, including Interpol, he

could freely fly away from Almaty airport

with the help of invisible hands... and

found safe shelter in ," the

From "he is still trying to set up

his jihad group" that has planned terrorist

attacks in , it said.

Nazarov was granted refugee status by

for Refugees in 2006 and in recent years

has been living openly in , where

he has criticised the Uzbek authorities.

The former imam of Tokhtoboy mosque

in the Uzbek capital , Nazarov

has previously denied links to extremists

in , a majority-Muslim former

In the attacks last June, a deputy director

of a religious school and a number of senior