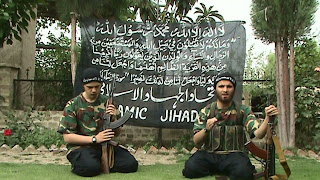 ***
It is a document from the heart of the jihad:
Eric Breininger, a German homegrown terrorist
recently killed in Pakistan, worked on his memoirs
until just days before his death. On Wednesday,
the document was posted on the Internet.

“So much is written and said about me, with

my given name Eric Breininger. The Internet

and the media are full of it, but most of it is

made up and lies.”

So begin the memoirs of Eric Breininger, the

German jihadist who was killed by Pakistani

soldiers in the border region of

at the end of April. His autobiography was

posted on the Internet on Wednesday.

Right from the first pages, it seems as

though Breininger, who went by the name

“Even as this work is being composed, I am

not sure that it will ever be completed, as

we find ourselves at war.”

The appendix, written by a comrade, makes

it clear that Breininger worked on his memoirs

until just a few days prior to his death.

“My Path to Jennah,”
using the Arabic word for “paradise.”
And it is an impressive document, offering a
detailed look into militant jihadism. It is an

fighting in the and an intimate

look at the thoughts of a radical who is

certain he is in the right.

Breininger was an associate of the so-called

who plotted to bomb US targets in

in 2007. Confessions from that group have

provided an excellent source for insights into

German jihadists fighting in the border

light on their activities and thoughts.