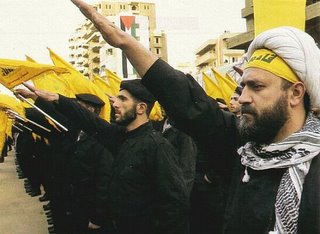 
"Al Manar and al Nour are the media arms of the Hizballah
terrorist network and have facilitated Hizballah's activities.

- Any entity maintained by a terrorist group – whether
masquerading as a charity, a business, or a media outlet –
is as culpable as the terrorist group itself," said Stuart Levey,
Treasury Under Secretary for Terrorism and Financial Intelligence.

Al Manar has employed multiple Hizballah members.
One al Manar employee engaged in pre-operational surveillance
for Hizballah operations under cover of employment by al Manar.
Al Manar and al Nour have supported fundraising and
recruitment efforts by Hizballah.
Al Manar raised funds for Hizballah through advertisements
broadcast on the network and an accompanying website
that requested donations for the terrorist organization.
As recently as late 2005, Hizballah-affiliated charities
aired commercials on al Manar, providing contact
information and bank account numbers for donations.
Moreover, Hizballah Secretary General Nasrallah publicized
an invitation for all Lebanese citizens to volunteer for
Hizballah military training on al Manar and al Nour.

In addition to supporting Hizballah, al Manar has also
provided support to other designated Palestinian terrorist
organizations, including the Palestinian Islamic Jihad (PIJ)
and al Aqsa Martyrs Brigade, notably transferring tens
of thousands of dollars for a PIJ-controlled charity.
PIJ is listed as a Specially Designated Global Terrorist
and a Foreign Terrorist Organization by the U.S. Government,
and is also named on the European Union's list of terrorist
entities.
Hizballah Secretary General Hasan Nasrallah,
along with Hizballah's Executive Council, managed and
oversaw the budgets of al Manar and al Nour.

Hizballah is a Lebanon-based terrorist group.
Until September 11, 2001, Hizballah was responsible
for more American deaths than any other terrorist
organization. Hizballah is known or suspected to have
been involved in numerous terrorist attacks throughout
the world, including the suicide truck bombings of the
U.S. Embassy and U.S. Marine Corps barracks in Beirut
in 1983 and the U.S. Embassy annex in Beirut in September
1984. Hizballah also executed the 1985 hijacking of
TWA Flight 847 en route from Athens to Rome and
assumed responsibility for the suicide bombing of the
Israeli embassy in Argentina in 1992.
It also attacked the Israeli cultural center in Buenos Aires in 1994.
On January 25, 1995, the Annex to Executive Order 12947
listed Hizballah as a Specially Designated Terrorist.
The Department of State designated Hizballah as a
Foreign Terrorist Organization in 1997. Additionally, on
October 31, 2001, Hizballah was designated as a
Specially Designated Global terrorist under Executive Order 13224.

Today's action prohibits transactions between U.S. persons
and the designated entities and also freezes any assets
they may have under U.S. jurisdiction."