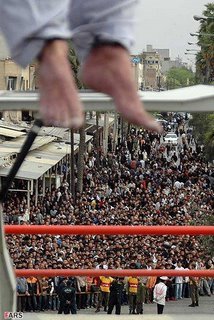 
‘Would you write the name you’d like to use here, and your
real name there?”, asked the girl at reception. I had just been
driven to a hotel in the Hague. An hour earlier I’d been greeted
at Amsterdam airport by a man holding a sign with a pre-agreed
cipher. I hadn’t known where I would be staying, or where I
would be speaking. The secrecy was necessary: I had come to
Holland to talk about Islam. Last weekend, four years after his
murder, Pim Fortuyn’s political party, Lijst Pim Fortuyn, held
a conference in his memory on Islam and Europe. The organisers
had assembled nearly all the writers most critical of Islam’s current
manifestation in the West. The American scholars Daniel Pipes and
Robert Spencer were present, as were the Egyptian-Jewish exile
and scholar of dhimmitude, Bat Ye’or, and the great Muslim
apostate Ibn Warraq. Both Ye’or and Warraq write and speak
under pseudonyms. Standing at the hotel desk I confessed to the
girl that I didn’t have any other name, couldn’t think of a good
one fast.

I was given my key and made aware that the other person
in the lobby, a tall figure in a dark suit, was my security detail.
I was taken up to my room where I changed, unpacked and headed
back out — the security guard now positioned outside my bedroom
door. I had been invited to deliver the closing speech to the memorial
conference on what would have been Fortuyn’s 58th birthday. I said
I would talk on the effects of Europe’s increasingly Islamicised p
opulation and advocate a tougher European counterterror strategy.
There was no overriding political agenda to the occasion, simply a
desire for frank discussion. The event was scholarly, incisive and
wide-ranging. There were no ranters or rabble-rousers, just an
invited audience of academics, writers, politicians and sombre
party members. As yet another example of Islam’s violent
onfrontation with the West (this time caused by cartoons) swept
across the globe, we tried to discuss Islam as openly as we could.
The Dutch security service in the Hague was among those who
considered the threat to us for doing this as particularly high.
The security status of the event was put at just one level below
“national emergency”. This may seem fantastic to people in Britain.

But the story of Holland — which I have been charting for some years
— should be noted by her allies. Where Holland has gone, Britain and
the rest of Europe are following. The silencing happens bit by bit.
A student paper in Britain that ran the Danish cartoons got pulped.
A London magazine withdrew the cartoons from its website after
the British police informed the editor they could not protect him,
his staff, or his offices from attack. This happened only days before
the police provided 500 officers to protect a “peaceful” Muslim protest
in Trafalgar Square. It seems the British police — who regularly
provide protection for mosques (as they did after the 7/7 bombs)
— were unable to send even one policeman to protect an organ of
free speech.

At the notorious London protests, Islamists were allowed
to incite murder and bloodshed on the streets, but a passer-
by objecting to these displays was threatened with detention for
making trouble. Holland — with its disproportionately high Muslim
population — is the canary in the mine. Its once open society is
closing, and Europe is closing slowly behind it. It looks, from Holland,
like the twilight of liberalism — not the “liberalism” that is actually
libertarianism, but the liberalism that is freedom.
Not least freedom of expression.

All across Europe, debate on Islam is being stopped.
Italy’s greatest living writer, Oriana Fallaci,
soon comes up for trial in her home country, and in Britain
the government seems intent on pushing through laws that would
make truths about Islam and the conduct of its followers impossible
to voice. Those of us who write and talk on Islam thus get caught
between those on our own side who are increasingly keen to prosecute
and increasing numbers of militants threatening murder.
In this situation, not only is free speech being shut down, but our
nation’s security is being compromised. Since the assassinations
of Fortuyn and, in 2004, the film maker Theo van Gogh, numerous
public figures in Holland have received death threats and routine
intimidation. The heroic Somali-born Dutch MP Ayaan Hirsi Ali
and her equally outspoken colleague Geert Wilders live under
constant police protection, often forced to sleep on army bases.
Even university professors are under protection.

Europe is shuffling into darkness.
It is proving incapable of standing up to its enemies,
and in an effort to accommodate the peripheral rights of a minority is
failing to protect the most basic rights of its own people. The governments
of Europe have been tricked into believing that criticism of a belief is
the same thing as criticism of a race. And so it is becoming increasingly
difficult and dangerous to criticise a growing and powerful ideology
within our midst. It may soon, in addition, be made illegal.
I had planned — the morning after my speech — to see Geert
Wilders, but instead spent the time catching up with his staff.
Their leader had been called in by the police to discuss more
than 40 new death threats he had received over the previous days.
As I left the Netherlands I once again felt terrible sorrow for a
country that is slowly being lost. A society which should be
carefree and inspiring has become dark and worried.

The jihad in Europe is winning. And Holland, and our continent, takes
one step further into a dark and menacing future.

(Douglas Murray is the author of Neoconservatism: Why We Need It)
Upplagd av hcp kl. 08:00