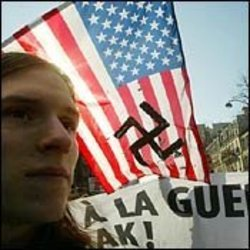 Kaliforniens delstatsparlament antog
i förra veckan ett skarpt uttalande mot
den ökande antisemitismen på delstatens
universitet. Det handlar både om islamistisk
och vänsterextrem antisemitism.
I House Resolution 35 sägs bl a "our public
universities — the institutions we pay our tax
dollars to support — are overrun with anti-
Semitic rhetoric that extends beyond the
boundaries of what should be considered
free speech."
**
House Resolution 35 is the result of a July
report released by the University of California
Advisory Council on Campus Climate, Culture,
and Inclusion. The 10-page report confirms that
“Jewish students are confronting significant and
difficult climate issues as a result of activities on
campus which focus specifically on Israel, its
right to exist and its treatment of Palestinians.
The anti-Zionism and Boycott, Divestment and
Sanctions (BDS) movements and other mani-
festations of anti-Israel sentiment and activity
create significant issues through themes and
language which portray Israel and, many times,
Jews in ways which project hostility, engender
a feeling of isolation, and undermine Jewish
students’ sense of belonging and engagement
with outside communities.”
**
The report also described protests at
various campuses where Israeli Jews
are portrayed as “Nazis” who commit
genocide. Among these protests is
an annual “Israel Apartheid Week”
which features students in “die-ins,”
in which students pretending to be
Palestinians collapse as if they had
been murdered en masse by Israeli
Jews.
During these protests, the Star of David
integrated with the swastika is a common
symbol.
Upplagd av hcp kl. 18:00