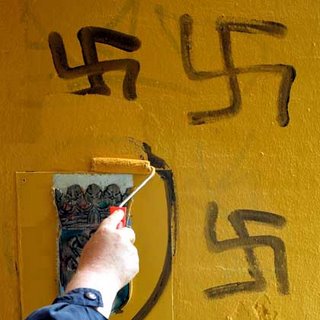 "Right-wing adolescents and young
Muslims are displaying levels of
anti-Semitism that were long
considered unthinkable in Germany.
At many German schools, the word
"Jew" is becoming an insult again.
German politicians don't seem to know
how to respond.
The Jewish High School in Berlin's
central Mitte district resembles a
high-security ward.
Those who want to access the
imposing old building on Grosse
Hamburger Strasse have to pass
through a meticulous security check.
The building is surrounded by a fence
several meters high and video cameras
register every move.
Policemen stand guard in front of the building.
"We're no ghetto," school director
Barbara Wittig clarifies.
"We offer those children protection
who have to fear discrimination
at other schools," she adds.
And such cases have increased
dramatically in the past two years.
"I always though Jews were integrated
into German society," says Wittig.
"I would never have thought it possible
for anti-Semitism to express itself as
virulently as it has recently."