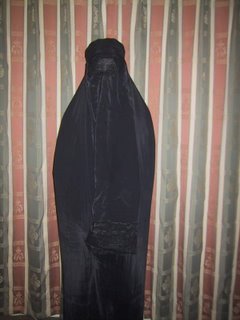 "A man who was being hunted for the
murder of a policewoman is understood to have
escaped from Britain by disguising himself as
a veiled Muslim woman.

Mustaf Jama, a prime suspect in the
fatal shooting of PC Sharon Beshenivsky,
assumed his sister’s identity
— wearing the niqab and using her passport —
to evade supposedly stringent checks
at Heathrow, according to police sources.
The use of the niqab,
which leaves only a narrow slit for
the eyes, highlights flaws in British airport security.
At the time, Jama was Britain’s
most wanted man, while Heathrow was
on a heightened state of alert after the
7/7 terrorist atrocities in London
five months previously. ".....
Läs artikeln i Timesonline.
Upplagd av hcp kl. 11:44