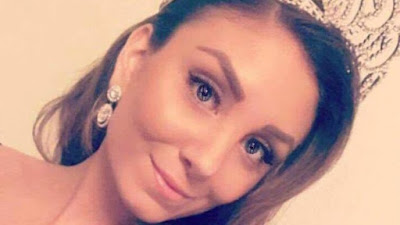 A Swedish-Lebanese beauty queen was stripped of her crown after pageant organizers discovered she visited Israel last year, the London-based Independent reported Wednesday.

Amanda Hanna won Miss Lebanon Emigrant 2017 earlier in August, but a 2016 school trip to Israel on her Swedish passport has cost her the title.

“After communicating our decision with Lebanon’s Minister of Tourism, he decided that Hanna should be stripped of her title because her visit to Israel violates our country’s laws,” said a statement from The Festival of Lebanese Emigrants in Dhour Al Choueir.
In Lebanon, any contact with Israelis is considered illegal and violators risk jail time.
Following her trip to Israel, Hanna wrote on Facebook, “it turned out that I was wrong,” referring to her previous assumptions about the Jewish state.
“I’ve gotten to know people who have come to stand close to me & I have developed in particular as a person. It has been a wonderful trip & I am incredibly happy that I participated,” she said.
This wasn’t the first time a Lebanese pageant contestant found herself into trouble due to Israeli connections.
In January 2015, Miss Lebanon nearly lost her crown after she was photographed with Miss Israel. Sally Greige was to be investigated for appearing in a photo with Israeli representative to the Miss World beauty pageant, Doron Matalon, who uploaded the image to her Instagram account. Greige later defended herself, accusing Matalon of forcing her way into the photo at the last minute, and without her consent.
Matalon insisted the joint photo was genuine and was saddened that Greige was under fire at home.
Mera om Libanons islamisering